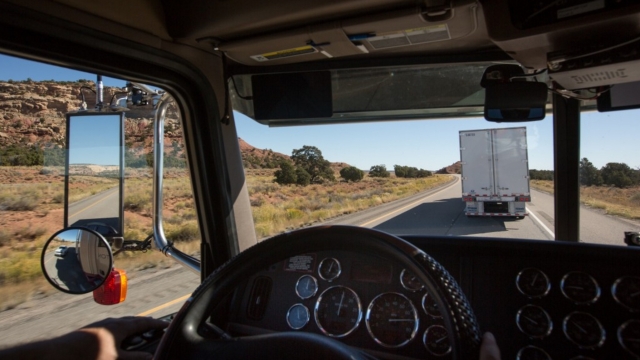 Automation is often one of the things we immediately link to job loss. So, when a fleet of self-driving trucks platooned across Europe, it's no surprise that some assumed the new tech was another way machines would eventually replace us.

If anything, though, semis with driverless capabilities are more likely to make truck drivers' jobs a lot better.

The men and women who drive trucks log a lot of hours, and they're expected to meet strict delivery deadlines. Weather, traffic and road construction are just a few factors that could knock a trucker off their schedule.

Occasionally, this has resulted in sleep-deprived drivers and even accidents that can be fatal.

For truckers, automation could mean better work conditions. It's also worth noting self-driving semi trucks are not fully autonomous — because the trucks would still require a person.

The small convoys that made the trek across Europe in platoon form had a driver in each semi. That's because the human truckers still had to do some driving. Actually, the semis only drove themselves on roads during "normal" traffic conditions. Even then, a person in the lead truck set the platoon's speed and plotted routes.

Taking the wheel out of trucker's hands — so to speak — means the driver's job is a little less stressful. And, who knows, maybe the autonomous tech will get so good that one day drivers will be able to get some shut eye while in transit.

If these driverless trucks are put to work, they'll also need a person around to do all the stuff a truck wouldn't be able to do for itself. Like performing maintenance during the trip.

"Just take a look. Look at all the snow build up between these rails. ... You probably wanna clean that off — because it probably puts you over weight," said YouTuber Trucker Rudi.

Another thing trucks can't do without a person present: inventory and paperwork. Yeah, those are part of a truckers' job responsibilities, too.