Driverless Trucks: Coming To A UK Road Near You 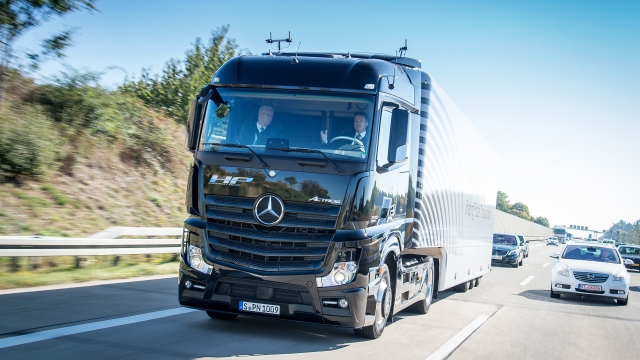 SMS
Driverless Trucks: Coming To A UK Road Near You
By Ryan Biek
By Ryan Biek
March 6, 2016
British roads may pose extra challenges for the new technology.
SHOW TRANSCRIPT

Driverless trucks are expected to be tested on British roads this year.

The technology in question reportedly could let 10 trucks be driven via computers mere feet from each other. Driving in a group is said to help each save fuel — a big deal for the environment, considering how many trucks are on the road.

The British government hopes the trucks will make deliveries and traffic run faster.

In October, Daimler successfully tested a self-driving truck on a German public road. However, some remain skeptical of how well the tech will work in the U.K.

The president of the Automobile Association said the U.K.'s highway network has "more entrances and exits ... than any other motorways in Europe or indeed the world."

And because cars are constantly trying to enter and exit the roads, it'd be hard for them to get around a pack of 10 trucks.

America faces a similar situation. Seventy percent of goods shipped within the U.S. are moved by trucks, requiring over 3 million drivers, which means road congestion and pollution.

Daimler's subsidiary, Freightliner, is currently working on making driverless trucks a reality in the U.S.

This video includes clips from Daimler AG and Freightliner and images from Getty Images.