Driverless Cars Will Make Roads Safer, If They Ever Get Here 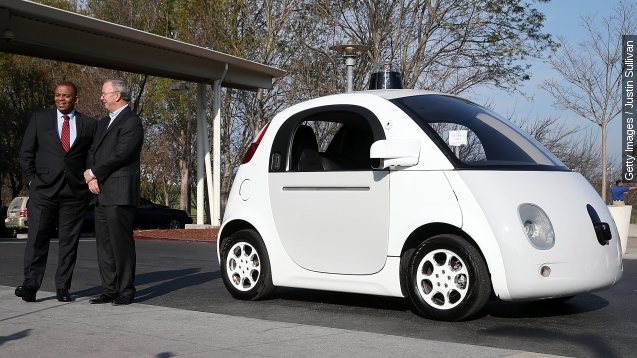 SMS
Driverless Cars Will Make Roads Safer, If They Ever Get Here
By Evan Thomas
By Evan Thomas
October 4, 2015
Autonomous vehicles could save thousands of lives. But people might not want to give up the driver's seat, and these cars might not make it to market.
SHOW TRANSCRIPT

Google's letting its cars drive reporters around again, which means it's time for another round of stories on our imminent hands-off future.

The verdict, in a phrase, is "it's about time" — especially when it comes to the potential lifesaving effects of self-driving vehicles.

There were 32,719 U.S. auto fatalities in 2013. If driverless cars could avert close to 30,000 of them, they would have a nationwide lifesaving effect approaching that of modern vaccines.

So bring on the cute autonomous chauffeurs, right? All they have to do is win over the American driving population, which has the fourth highest rate of motor vehicles per capita in the world. (Video via Google)

This is an environment where hitting the accelerator yourself has been part of the public consciousness for a hundred years. (Video via History Channel, Tesla Motors)

"I think there's always going to be a pleasure in being able to hit the open road and enjoy that. But I think for a large percentage of our day to day driving, we're going to much prefer for the car to drive itself," Google's Sergey Brin told reporters. (Video via BBC)

Beyond rewriting that bit of culture, people will have to learn to trust  autonomous vehicles. There will be fatalities — and associated publicity — that could slow down widespread adoption and highlight the Asimovian dilemma: Who will the robotic car prioritize in a life-threatening situation? (Video via Google)

A writer at the BBC says, "The way Google sees it is that even with those theoretical scenarios — where it's forced to choose between what it thinks is the least harmful — the Google car is still far smarter than a human."

Google might be onto something here. Its cars share all their experiences and collectively refine their driving algorithms for it. They're like a mini Sunday-driving version of the Borg. (Video via Google, Paramount Pictures)

Google says by June of this year, this data amounted to more than a million miles of driving — or 75 years of average human driving experience.

But it's not clear when they'll take the wheel for consumers. As far as we know, Google doesn't have an auto plant to start up.

And that's ignoring the the legal and aforementioned moral quagmires these cars will have to navigate before they see widespread adoption. (Video via Google)

But Google's self-driving car director joked with reporters that his son will turn 16 in four years. It makes a nice soft deadline.