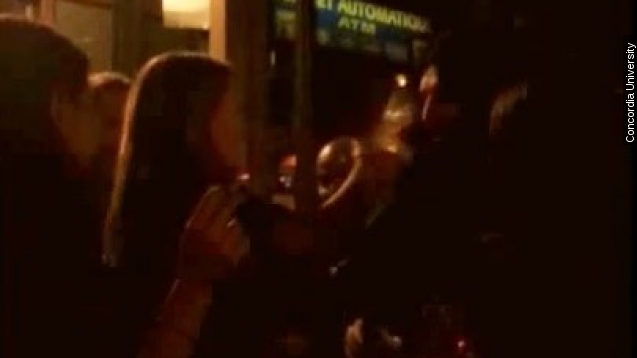 SMS
Drinks Thrown At Anti-Feminist Blogger During Canada Tour
By Ryan Biek
By Ryan Biek
August 10, 2015
In a battle over free speech and protected speech in Canada, an anti-feminist blogger got doused in drinks after critics spotted him at a bar.
SHOW TRANSCRIPT

This isn't the normal pick-up line gone wrong. It's actually a small battle in a free speech war that's been brewing in Canada. We should warn you now that the topic is a sensitive one. (Video via Concordia University)

The man who had beer thrown on him is Daryush Valizadeh, aka Roosh V. He's captured Canadian headlines for being a pick-up artist and anti-feminist blogger.

The Huffington Post Canada reports he's made comments like, "If we legalize rape, women will be more careful with their bodies," and has said, "Fat girls are simply unattractive." He's also been accused of advocating for the decriminalization of rape and sexual assault.

According to CTV, Roosh V had some recent online ads promoting workshops in Toronto and Montreal teaching "practical solutions for helping (men) improve their intimate relationships."

When word about the seminars got out, over 40,000 people signed a petition to the mayors of Mississauga, Ontario, Toronto and Montreal to condemn his visit.

The petition argued his online comments could be considered hate speech under Canada's Criminal Code.

But Canada's Immigration Minister tweeted Roosh V's "content is completely counter to Canadian values and common decency" and said he was "looking at all options … to protect the rule of law on Canadian soil."

The mayor of Montreal did condemn Roosh V's visit, but despite that and reportedly losing venues, Roosh V held a seminar in Montreal, which he celebrated on Twitter.

The night before the seminar, Roosh V was recognized in a bar even though he reportedly wore a wig, and it was there that the now viral video of him getting doused in beer was captured.

A seminar is set for Aug. 15 in Toronto, though the venue hasn't been released.