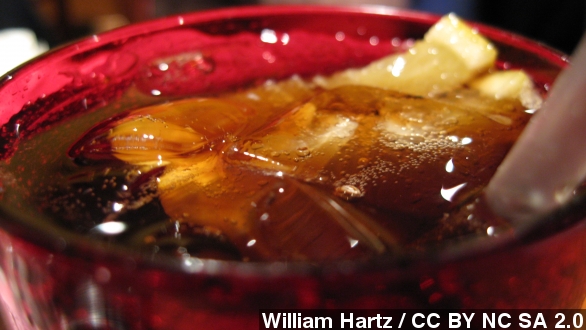 A new study suggests you might not want to take that "diet" label on certain sodas too seriously because it's all going to your waistline, especially if you're older.

The study, published in the Journal of the American Geriatrics Society, found an increased intake of diet soda led to an increased mid-section, too.

We were being nice by saying "increased mid-section." Metro just came right out and said it. The diet drinks make you ... the dreaded "F" word: Fat.

Researchers looked at data from 749 adults over the age of 65. Over the course of a decade, those who drank diet soda ended up with larger waists — literally, more than double an increase in size than those who didn't drink diet soda.

And the waist-specific focus is important. A bigger waist size has been linked to an increased risk for Type 2 diabetes.

As HealthDay points out, while the study did find an association between diet soda and wider waists, it wasn't "designed to prove whether drinking diet soda directly caused weight gain around the middle."

Regardless, The Huffington Post says good ol' sugary soda isn't any nicer to your waist.

"For whatever it's worth, plenty of previous studies have had no trouble linking sugar-sweetened sodas with weight gain."

And the American Beverage Association, which represents producers of soft drinks, unsurprisingly had something to say about this study, too. It said in a statement:

"It's important to recognize that this observational study looked at an aging population -- those over 65 at the beginning of the study, who are already at risk of weight gain and cardiovascular disease -- and then made conclusions based on associations."

But zero calories doesn't mean zero weight gain. Sharon Fowler, one of the study's authors, says it could be that artificial sweeteners disrupt the way the body processes sugar and make people more hungry, which in turn leads to weight gain.