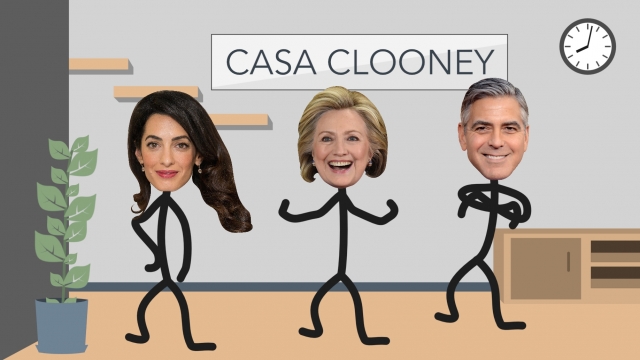 Have you always dreamed of spending an evening with George Clooney? Hillary Clinton is here to make that dream come true.

The Democratic presidential candidate is launching a contest, and the winners will get to hang with George, Amal and Clinton herself at the Clooneys' home — though we're guessing it's not the one on Lake Como in Italy.

In addition to the contest, the A-list couple will hold several fundraisers for Clinton in San Francisco and Los Angeles.

The four ladies released a pro-Clinton ad during a March Shonda-Thursday where the stars and showrunner talked about why Clinton is important for women.

And Perry has been on board with the Clinton campaign from the start. She's performed at rallies in Iowa, worn homemade campaign shirts and even painted her nails in theme.

And even though they have publicly denied the cameo was an endorsement, "Broad City" co-creators and stars Ilana Glazer and Abbi Jacobson released a clip for an upcoming episode where the two ladies freak out when they meet Clinton.

In addition to these women (and George), Olivia Wilde, Kim Kardashian, Beyoncé, Britney Spears and Kendall Jenner have all expressed their support for Clinton.