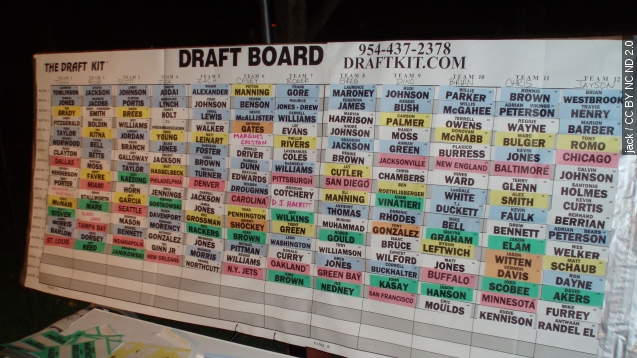 The fantasy sports world is in turmoil this week after allegations of what amounts to insider trading at both DraftKings and FanDuel, two dominant sites for daily fantasy gaming.

And things aren't going to be getting easier anytime soon.

New York's attorney general has filed an inquiry with both sites, asking for the names, job titles and job descriptions of the employees potentially involved in the sketchy betting.

To make things tougher, the betting sites and ESPN have agreed to put their partnerships on the back burner.

"ESPN today continued running commercials for the daily sports fantasy companies but has removed sponsorships within shows. This industry is big. It is getting bigger," ESPN's Bob Ley announced.

And USA Today reports DraftKings has taken things a step further, pulling its advertisements from the network for the time being.

The uproar came after this New York Times article, bringing to light a DraftKings employee who inadvertently released data early and, in the same week, won $350,000 in a FanDuel contest.

FanDuel has now permanently banned employees from playing in daily fantasy leagues and more changes continue to come down.

Both sites bill themselves as non-gambling sites where players can enter daily contests to win money and prizes which, on the surface, sounds an awful lot like gambling. For now, though, fantasy gaming is classified as a "game of skill."

"We haven't seen anything yet, but we expect it's probably going to be the next bubble such as the Internet sweepstakes centers," said Brian Kongsvik, director of The Florida Council on Compulsive Gambling.

Major League Baseball, which owns a stake in DraftKings, doesn't allow its players and coaches to participate in fantasy games for money. The league issued a statement Monday saying it was "surprised to learn" DraftKings employees were allowed to play in these daily fantasy leagues.

Even those who have scored big with the fantasy sites have called for regulation. Cory Albertson won more than a million dollars playing on the sites, but he wrote in The Wall Street Journal, "The industry should aim to hire professionals who are more interested in customer service ... than playing games on a competing site."

Both FanDuel and DraftKings have released statements saying their employees aren't involved in insider trading.