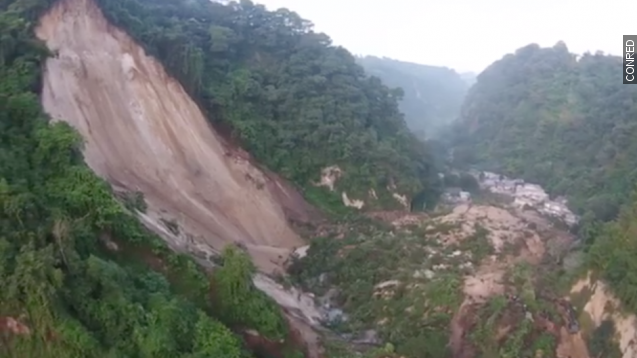 SMS
Dozens Dead, Hundreds Missing In Guatemalan Landslide
By Christian Bryant
By Christian Bryant
October 3, 2015
More than 100 homes were buried in the landslide, which was triggered by heavy rains Thursday. The government reports dozens have died.
SHOW TRANSCRIPT

Dozens of people are dead and hundreds more have been reported missing after a devastating landslide in Guatemala.

Heavy rain triggered the landslide Thursday, causing part of a hill to collapse onto El Cambray — which is about 10 miles east of Guatemala City, the nation's capital. Guatemala's disaster agency, CONRED, published this aerial video of the affected area.

Reports from the area say more than 100 homes were destroyed in the landslide.

"The houses were left buried approximately 10 meters or 15 [meters] under, which is making it difficult to carry out the search and rescue," one rescue worker told reporters.

The death toll is expected to rise as search and rescue efforts continue. (Video via CCTV)

This video includes an image from CONRED.