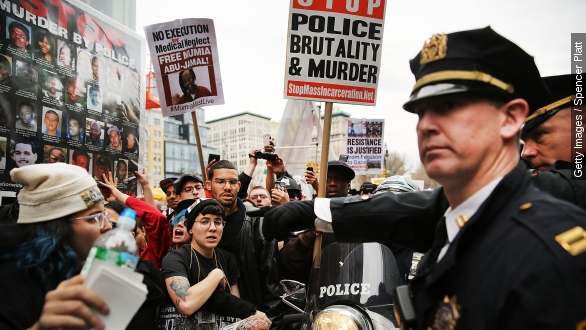 SMS
Dozens Arrested After Protesters Flood Cities Across Country
By Jay Strubberg
By Jay Strubberg
April 15, 2015
Dozens of people have been arrested as protesters marched across the country Tuesday in apparent demonstrations against police brutality.
SHOW TRANSCRIPT

Dozens of people have been arrested as protesters marched throughout the country Tuesday in apparent demonstrations against police brutality.

New York City officials say at least 34 people were arrested after hundreds of protesters marched in the Big Apple and across the Brooklyn Bridge, blocked traffic and later clashed with police. (Video via WNBC)

At least one off-duty police officer was reportedly punched in the face, and officials are investigating whether another cop was hit with a beer bottle. The Stop Mass Incarceration Network organized the demonstrations. (Video via WCBS)

Tracking social media, The New York Times also spotted reports of "protesters being rounded up and put in police vans."

"Look at these pictures on the banner. These are just a few of the hundreds of people killed every year by the police. The killer cops are getting away with it, and what we're saying is, 'That must stop,'" protest organizer Carl Dix told NY1.

The same protest group as the one in NYC is reportedly responsible for the LA demonstrations and others in cities across the country. The group used #ShutDownA14 on social media to spread the word about the mass event.

Tuesday's protests seem to be in response to recent shootings of unarmed black men at the hands of white police officers.

Over the past two months, the issue of excessive police force has been thrust into the national spotlight following the fatal shootings of 50-year-old Walter Scott in South Carolina and 19-year-old Tony Robinson in Wisconsin. (Video via The New York Times)

That's in addition to the outrage that continues to boil over since grand juries ruled in favor of white police officers in cases involving the deaths of Michael Brown in Ferguson, Missouri, and Eric Garner in New York City last year.