Dozens Are Missing After A Really Old Bridge Collapses In India 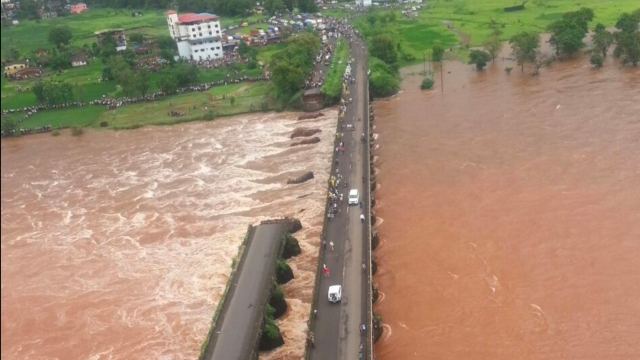 SMS
Dozens Are Missing After A Really Old Bridge Collapses In India
By Melissa Prax
By Melissa Prax
August 3, 2016
An Indian bridge built during British colonization collapsed in the state of Goa. At least 22 people are missing.
SHOW TRANSCRIPT

A bridge in India's southwest state of Goa collapsed after heavy rains and flooding hit the area.

At least 22 people are missing after two buses and other vehicles fell into the water. Dozens of rescuers are searching the area.

"We saw a few cars fall down in front of our eyes," a witness told Aaj Tak.

In the hours following the collapse, rescuers have found at least two bodies.

The Mahad bridge that collapsed is a remnant of British colonization. The bridge spans the Savitri River and is only about 22 miles from the ocean.

Traffic has since been redirected to a nearby bridge.

In March, at least 20 died after a bridge collapsed in one of Kolkata's residential neighborhoods.