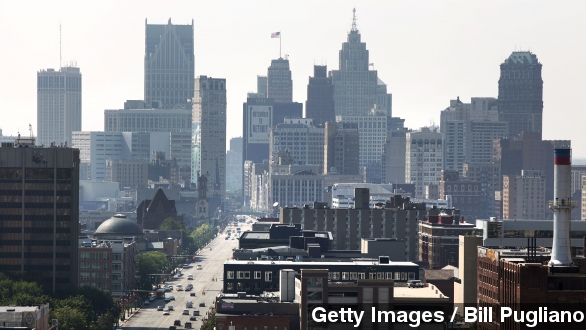 Downtown Detroit is slowly coming back to life this afternoon after the majority of its buildings lost power earlier today. (Video via WXYZ)

In all, Detroit's DTE Energy Co.'s outage map on its website shows around 100 customers were without power.

"It's essentially the public lighting authority that's affected. So it's the City of Detroit right now. Any public building. That's why the courthouses, the elevators aren't working," reporter Roop Raj says.

People were asked to evacuate numerous government buildings like the Frank Murphy Hall of Justice, City Hall and the City County Building after they lost power around 10:30 Tuesday morning. There were also reports of people being stuck in elevators.

USA Today reports an ongoing murder trial had to be put on hold because the courthouse had to be cleared and Detroit Medical Center's Detroit Receiving Hospital rerouted emergency trauma-level patients to nearby hospitals.

Also affected were local fire stations. The Detroit Free Press reported a few of the stations are currently running on generators.

The Detroit Public School system tweeted that students will only be attending classes for a half day today due to the outage.

Also turning to social media to let people know how the outage is affecting them are Wayne State University, the Detroit Institute of Arts and the Detroit People Mover.

And, of course, as WXYZ shows, the power outage affected all the traffic lights downtown.

WDIV reports the Detroit Public Lighting Department said it's determined the cause of the "major cable failure" and is working to fix the issue.

And that's it. No word has been given on what caused the power outage.

But unlike a storm that caused around 180,000 residents to lose power in southeast Michigan last month, many believe that this newest power outage can be attributed to outdated equipment.

"I suspect that this problem is related to the Detroit power lines because of the buildings that are out, like Coleman A. Young and Frank Murphy Hall of Justice, which are on Detroit's grid, which the city is in the process of having DTE replace," Chief Judge Robert Colombo Jr. told WXYZ over the phone.

Which goes along with the statement DTE gave MLive.com in which it said, "The problem is not with DTE's infrastructure but the city's."

In 2013, downtown Detroit was hit with a similar power outage — although not as widespread — that ended up being attributed to a system overload by officials.

And it sounds like Detroit has had problems with its other lighting systems as well.

The Public Lighting Authority of Detroit says on its website very little money has gone into fixing the city's street lighting system in the past 20 years: "Approximately one third of the lights in the system are not working for reasons that include copper theft, bulb outages, vandalism, obsolete technology, lack of repair staff and a lack of funds to pay for repairs."

Because of this, the city has been busy installing 55,000 new lights around the city and in nearby neighborhoods after selling $185 million in bonds.

The Detroit News reports the city is currently in the process of transitioning its power business over to DTE, a caveat of its recent bankruptcy proceedings. This transition process is said to take five to seven years.