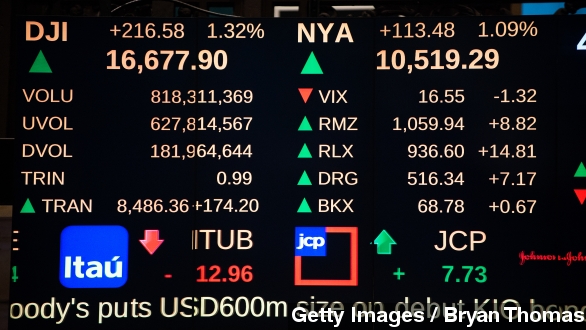 It's honestly hard to tell who's getting the most out of this deal. The Dow Jones announced it will welcome a new company into its group of 30, and we can't imagine the timing is a coincidence.

Friday's news comes only three days before a media event where the tech giant is widely expected to reveal full details on the Apple Watch.

For many, this news has been expected for some time. Apple's seven-way split of its stock last summer brought almost immediate speculation on joining the prestigious stock market index.

"Do you think this is because they want to end up on the Dow?" International Business Times' Jessica Menton asked in June 2014.

"I'm not sure about the Dow. I suppose there may be some ambition there about ending up on the Dow," Cuttone & Company's Senior VP Keith Bliss answered.

The inclusion on the Dow as one of the 30 companies representing the U.S economy was considered next to impossible back when Apple's stock price was such an outlier at roughly $700.

As one financial adviser told Bloomberg: "The Dow is supposed to be the dominant companies in each different sector of the economy and I don't think anybody can argue that Apple isn't by far the dominator in the phone sector. The digital age is taking over."

The company it's effectively kicking out?

The decision to drop AT&T surprised many, considering the telecom giant has been on and off the Dow for nearly a century. Plus, the company's rival Verizon will stay. But the allure of adding Apple is undeniable. (Video via AT&T & Verizon)

Friday afternoon, outgoing AT&T ranked 27th out of 30 Dow Jones companies in terms of stock prices. Apple would rank sixth. The move is expected to go through after St. Patrick's Day.