Doughnut-Licking And Divorce: The Biggest Celebrity Scandals Of 2015 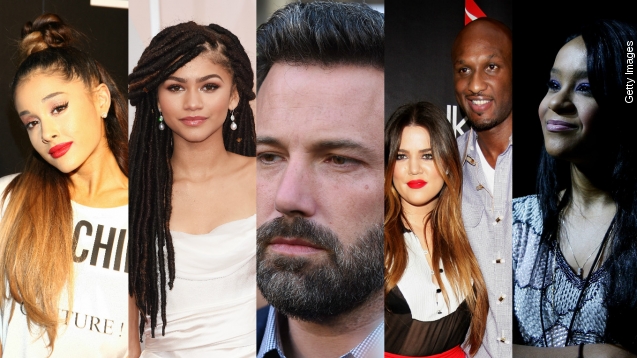 The end of the year is a time for reflection. So from divorces to doughnut-licking, let's reflect on 2015's biggest celebrity scandals.

No. 10 is Ariana Grande's affinity for doughnuts. The superstar was caught on camera apparently licking the fried dough and saying she hates America.

No. 9 is the bad blood between Nicki Minaj and Taylor Swift. After Minaj was snubbed for an MTV VMA video of the year nomination for "Anaconda," she posted this tweet saying, "If your video celebrates women with very slim bodies, you will be nominated for vid of the year."

T-Swift assumed the comment referenced her squad in "Bad Blood" and sparked a feud with Minaj. Even celebs like Bruno Mars, Ed Sheeran and Katy Perry — the rumored subject of the song — jumped in the ring.

And moving on to No. 8: the case of Rosie O'Donnell's runaway daughter, Chelsea. In August, Chelsea went missing and was later found in New Jersey with a man she'd met on Tinder.

Later that month, Chelsea turned 18 and decided to return to Wisconsin to live with her biological mother.

Zendaya fired back on Instagram, saying, "My wearing my hair in locs on an Oscar red carpet was to showcase them in a positive light, to remind people of color that our hair is good enough." She also called the comment "outrageously offensive."

No. 6 ended one of the biggest Hollywood marriages: Ben Affleck and Jennifer Garner. Affleck denied rumors that he was having an affair with the family nanny, Christine Ouzounian.

Garner and Affleck were reportedly already separated when the affair was said to take place, but the two were still legally married.

No. 5, it doesn't get more twisted than Brooks Ayers' bizarre cancer story. The "Real Housewives of Orange County" star, who dated Vicki Gunvalson, announced he was diagnosed with non-Hodgkin lymphoma.

People started questioning the validity of that diagnosis when he couldn't produce documents to prove it. Until he brought "medical records" to an exclusive E! News interview, claiming they came from the City of Hope hospital where he was treated. The documents later proved to be forged, but Ayers continues to maintain his diagnosis.

Coming in at No. 4: Lamar Odom's health scare. In October, the former NBA star was found unconscious at a legal brothel called the Love Ranch in Nevada. Odom had reportedly taken a mix of alcohol, cocaine and herbal sexual enhancement pills.

But another shocker: Presumed ex-wife Khloe Kardashian was actually still married to Odom. The judge never signed the divorce papers filed by the couple — rendering them legally married and giving Khloe power over his medical decisions. He has since been transferred to an LA hospital, where he continues to recover.

No. 3: The Josh Duggar revelations. In May, InTouch published an article claiming the eldest Duggar son sexually abused minors when he was a teen. As details unfolded that the abused minors included some of his younger siblings, "19 Kids and Counting" reruns were pulled from TLC.

Then — the explosive Fox News interview with patriarch Jim Bob Duggar and wife Michelle, who confirmed that four daughters, including Jill and Jessa, were victims.

The spotlight seemed to back off once TLC permanently canceled the show. That is until Gawker claimed Josh was a member of adultery site Ashley Madison. He entered rehab shortly after.

No. 2 is the mystery surrounding Bobbi Kristina Brown's death. Like her late mother, Whitney Houston, Bobbi Kristina was found unconscious in a bathtub in January. She was placed in a medically induced coma on a ventilator, at which point rumors began about her medical state and how she became unconscious in the first place.

Fingers pointed at rumored husband Nick Gordon, who checked into rehab as a result of the trauma. A lawsuit filed against him in June alleged assault, battery, intentionally inflicting emotional distress and taking money from Bobbi Kristina's account without permission.

Bobbi Kristina remained on life support until she was transferred to hospice in June. She died July 26.

And finally — the accusations that tarnished icon Bill Cosby. Women first came forward saying the comedian had drugged and sexually assaulted them.

This year, we've seen the number of women who've gone public with their stories reach more than 50. Cosby has a number of defamation and civil suits filed against him, but in December, he filed a countersuit against seven of his accusers.

In the suit, his lawyer says, "Mr. Cosby states plainly that he neither drugged nor sexually assaulted the defendants." Cosby has never been criminally charged or found "liable by any Court for any sexual misconduct."