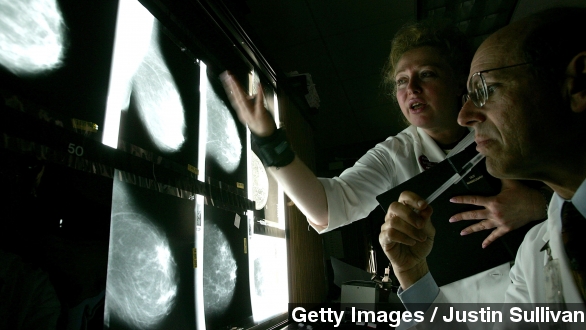 SMS
Double Mastectomy Might Not Improve Cancer Survival Rate
By Christine Slusser
By Christine Slusser
September 3, 2014
A study looking at 189,000 breast cancer patients found women who underwent double mastectomies had the same survival rate as those who did not.
SHOW TRANSCRIPT

The number of women with breast cancer choosing to have a double mastectomy, which removes both breasts, is rising.

But new research suggests women who remove only the cancerous breast have just as high of a survival rate, about 82 percent over a 10-year period, as those who remove both.

"It's what some doctors are calling an epidemic. ... There's no medical rationale for these double mastectomies in women without a genetic risk, and now a study showing it doesn't improve their survival."  (Video via CTV)

Some are calling it the Angelina Jolie effect. The star has been public about her decision to have a double mastectomy last year due to her high genetic risk.

As Time reports, "BRCA1 and BRCA2 gene mutations are said to increase a woman's risk for breast cancer by well over 50%." So one's decision to have a double mastectomy is oftentimes more preventative than anything else.

The study looked at more than 189,000 breast cancer patients in California from 1998 through 2011. This most recent research found that although double mastectomies are increasing, patient survival rate is not.

And CBS points out, "The results raise concerns about riskier, potentially unnecessary operations that increasing numbers of women are choosing."

In 1998, only about 2 percent of the women studied opted to have both breasts removed. In 2011, that number jumped to 12 percent. Keep in mind, that number is likely higher now, considering Jolie had her surgery in 2013.

But perhaps it's not just women's fear of cancer occurring in their healthy breast that has them opting for surgery. HealthDay reports: "For some women, aesthetics are a key consideration, the researchers wrote. Some newer reconstruction techniques produce better breast symmetry if both are reconstructed at the same time."

It's important to note doctors agreed in the HealthDay piece that receiving a double mastectomy is very much a personal choice. What's important is for people to fully understand the pros and cons of whatever their decision may be.