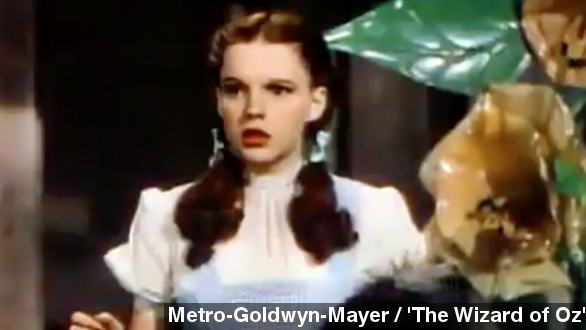 SMS
Dorothy's 'Wizard Of Oz' Dress Prototype Going To Auction
By Christine Slusser
By Christine Slusser
September 9, 2014
A prototype dress for the filming of "The Wizard of Oz" goes up for auction in November. It was the first to feature that now-famous gingham pattern.
SHOW TRANSCRIPT

A prototype of the iconic blue and white checkered dress made famous by Judy Garland in "The Wizard of Oz" will be going to the auction block.

It was a test dress and one of the very first that had the checkered fabric we've all come to know.

And ABC's Lara Spencer might be right. The original dress Garland actually wore in the film sold for $480,000 at auction in 2012,  according to CNN.

And those iconic ruby-red slippers Garland wore were appraised at $2 million to $3 million but never went to auction thanks to Leonardo DiCaprio and Steven Spielberg. They led donors to purchase the shoes so they could be given to a museum instead.

But back to the news of the prototype dress going up for sale. We were surprised media outlets weren't taking the opportunity to fill their headlines with puns.

No, they were all just talking about the dress. Where's the fun in that? Although at least Metro joked the shoes were going to be sold separately.

So, if you've got a few hundred thousand to spare, that piece of movie memorabilia could be yours. It goes to auction Nov. 24 at Bonhams in New York.

The auction is going to have a "There's no place like Hollywood" theme. Ah, there's the pun we were looking for. Other items up for sale include a piano from "Casablanca" and an outfit from "Gone With the Wind."