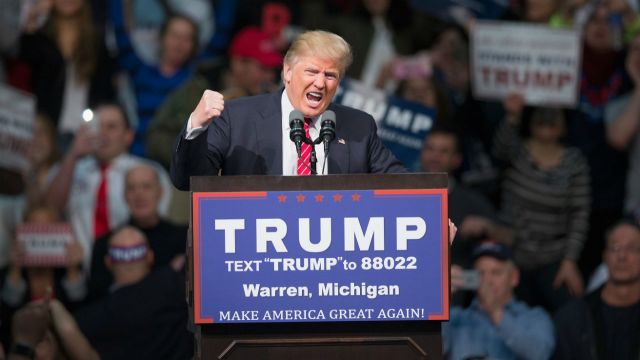 SMS
Donald Trump Wins Kentucky Caucus On Super Saturday
By Kaileen Gaul
By Kaileen Gaul
March 5, 2016
The Kentucky win is Trump's 11th in the race. It was one of four states up for grabs Saturday.
SHOW TRANSCRIPT

According to early projections, Donald Trump has won the Kentucky caucus.

This is Trump's 11th win in the presidential primary election, further cementing him as the GOP front-runner.

Earlier Saturday evening, Sen. Ted Cruz won the Kansas caucus, which was his fifth win in the race.

Kentucky was one of four states up for grabs in the GOP primaries Saturday. The next GOP primary election, which will be for Hawaii, Idaho, Michigan and Mississippi, is on March 8.

This video includes images from Getty Images and clips from Ted Cruz.