Donald Trump Was Not Happy With The Debate Moderators 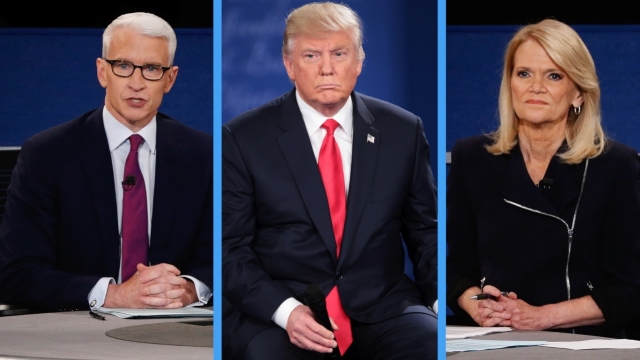 It seemed clear early on in Sunday night's debate that Donald Trump didn't think he was getting a fair shake from the debate moderators, ABC's Martha Raddatz and CNN's Anderson Cooper.

In one exchange, he accused the moderators of giving Hillary Clinton more time for her answers.

"You know, it's funny, she went over a minute over and you don't stop her. When I go one second over, it's like a big deal," he said.

"You had many answers," Raddatz responded.

SEE MORE: Will Debate Moderators Fact-Check? One Network Plans To Do So Live

And he also implied the moderators were ganging up against him.

"We have a question from Ken Karpowicz. His question about health care. Ken?" Cooper said, introducing the next question in the debate.

"We brought up the emails. Ken Karpowicz has a question," Cooper said, pointing to the audience.

During the first debate, Trump waited until the next morning to complain about moderator Lester Holt — even though he did say directly after the debate he thought Holt did a good job. Something tells us Trump won't be waiting that long to criticize these moderators.