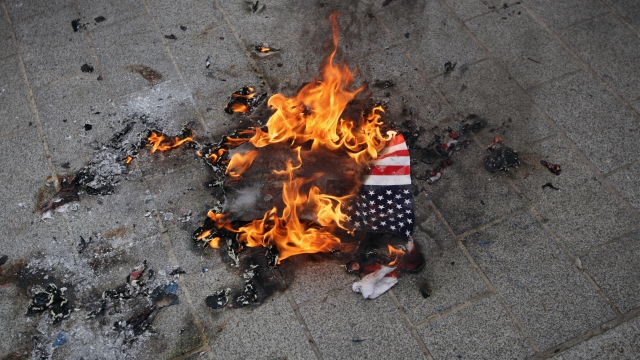 SMS
Donald Trump Wants To Outlaw Burning The American Flag
By Briana Koeneman
By Briana Koeneman
November 29, 2016
But burning the flag is an act protected by the First Amendment, and the Supreme Court has been hesitant to change that.
SHOW TRANSCRIPT

Burning the American flag should be a crime, according to Donald Trump.

The president-elect addressed the issue in a tweet early Tuesday morning: "Nobody should be allowed to burn the American flag - if they do, there must be consequences - perhaps loss of citizenship or year in jail!"

But burning the flag is an act protected by the First Amendment of the Constitution. And the U.S. Supreme Court has been very hesitant to change that.

To understand why, we have to go back to 1989, when the Supreme Court heard the now-infamous Texas v. Johnson case.

Some quick background: Gregory Lee Johnson was arrested after he burned an American flag outside the 1984 Republican National Convention to protest the policies of Ronald Reagan. He argued that his actions were "symbolic speech" and therefore protected by the First Amendment.

SEE MORE: Why Is Hate Speech Legal? We Asked An Expert

Ultimately, the court agreed. A 5-4 vote upheld the right of protesters to burn the flag.

The opinion read, in part: "The way to preserve the flag's special role is not to punish those who feel differently about these matters. It is to persuade them that they are wrong. We do not consecrate the flag by punishing its desecration, for in doing so we dilute the freedom that this cherished emblem represents."

Since then, the Supreme Court has struck down several laws that would outlaw the burning or desecration of the flag because they were found to violate freedom of speech.

Interestingly enough, Hillary Clinton sponsored a 2005 bill that would have banned flag burning. But it ended up being unsuccessful.

It's unclear if Trump will actually call on Congress to attempt another flag-burning law.