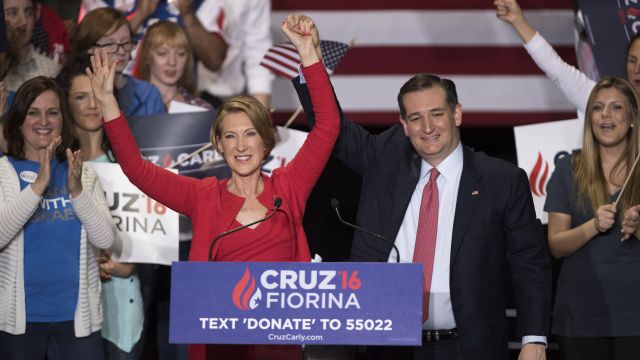 Ted Cruz’s new running mate may be causing him more harm than good — at least when it comes to fending off jabs from Donald Trump.

Carly Fiorina had a bit of a klutz moment Sunday when she fell off stage while introducing Cruz and his family at a rally. Fiorina was fine — she quickly stood back up and regained composure.

But she did so without the help of the Texas senator. He continued shaking hands with supporters while Fiorina was on the ground.

Unsurprisingly, that moment made for some new ammunition for Donald Trump: "Carly’s perfectly nice — by the way she fell off the stage the other day, did anybody see that? And Cruz didn’t do anything. Even I would’ve helped her, OK?" Trump said at a rally on Monday.

Cruz added Fiorina to his camp last week as his vice presidential pick. Only problem is, Cruz is mathematically eliminated from securing the GOP nomination — so, barring a contested convention, he won’t need a VP.

This video includes clips from MSNBC and images from Getty Images.