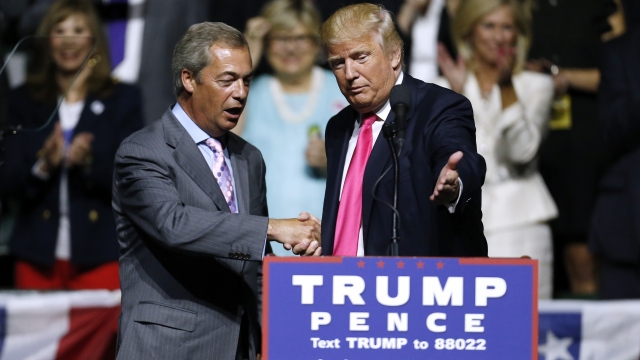 Donald Trump apparently wants to step up his game for the next presidential debate — which is why he's bringing out the big guns.

Nigel Farage, the politician who helped coax the U.K. out of the EU, has reportedly flown to the U.S. to help coach Trump for the second presidential debate.

"If I was an American citizen, I wouldn't vote for Hillary Clinton if you paid me!" Farage said during a Trump rally.

As leader of the far-right U.K. Independence Party, Farage is largely credited with forcing then-Prime Minister David Cameron to hold a referendum on the country's EU membership during the U.K. election. Both Cameron and Farage stepped down from their respective roles in the referendum's aftermath.

And Farage has so much to teach Trump about politeness, patience, respect for women, and basic geography.

"You have the charisma of a damp rag and the appearance of a low-grade bank clerk," Farage told former European Parliament president Herman Van Rompuy.

"Why don't you shut up and listen for a change?" he snapped at a fellow member of the European Parliament.

During an ITV debate, Farage told an audience member, "Just calm down there a little bit."

For all his rough edges, Farage is an accomplished public speaker and debater. Bringing him in suggests the Trump campaign wants to present a more focused and persuasive candidate during the next debate.

That's assuming Trump is willing to listen to Farage, of course. Ahead of the first debate, The New York Times reported Trump grew bored during his practice sessions and didn't pay attention to his briefing materials.

The next presidential debate is Oct. 9.