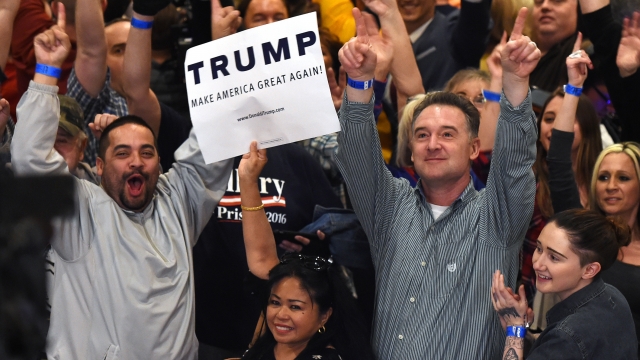 SMS
Donald Trump Scores Third Straight Win At Nevada Republican Caucuses
By Melissa Prax
By Melissa Prax
February 24, 2016
Trump took the lead early on in the Nevada caucuses, and he officially won Wednesday with 45.9 percent of the vote.
SHOW TRANSCRIPT

Donald Trump took the lead in the Nevada Republican Caucuses early on, and he officially won early Wednesday with 45.9 percent of the vote.

This is his third straight victory. And, according to Nevada exit polls, the majority of Latino caucusgoers within the GOP voted for Trump.

Marco Rubio and Ted Cruz placed second and third with 23.9 and 21.4 percent, respectively.

Based on these percentages, Trump, Rubio and Cruz are allocated delegates.

Ben Carson and John Kasich came in fourth and fifth place with 4.8 and 3.6 percent of the votes, respectively.

The next GOP vote will take place in various states March 1, known as "Super Tuesday."

This video includes clips from CNN and Fox News and images from Getty Images.