Donald Trump Says He Wants A Politician As His Running Mate 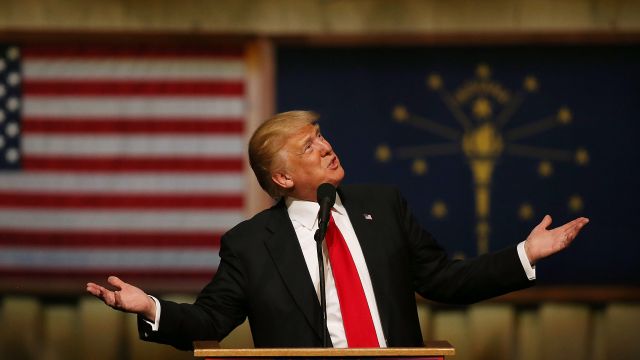 Donald Trump is on the lookout for a running mate, and he wants someone who's politically savvy.

"I will say I will probably go the political route. I have the business; let's call them talents," Trump said on "Morning Joe" after his win in Indiana.

He elaborated a little more on ABC, saying he'd be choosing a Republican, specifically.

"Will it be an elected official?"

"Most likely, and it will likely be a person with political experience."

With unfavorable ratings hovering in the 60s, Trump is a risky bet for anyone looking to link up with him.

"If you vote for Trump as a Republican, you're buying a ticket on the Titanic after you saw the movie. Don't do that," Lindsay Graham said on MSNBC in February.

Still, there are some potential VPs floating around out there. According to The New York Times, Chris Christie, Newt Gingrich, Ben Carson and Mary Fallin have all said they'd be interested in running with Trump.

As for John Kasich, the last Republican candidate who stood against the GOP front-runner? The Donald told the Times the Ohio governor isn't on his short list.

This video includes clips from MSNBC and C-SPAN images from Getty Images.