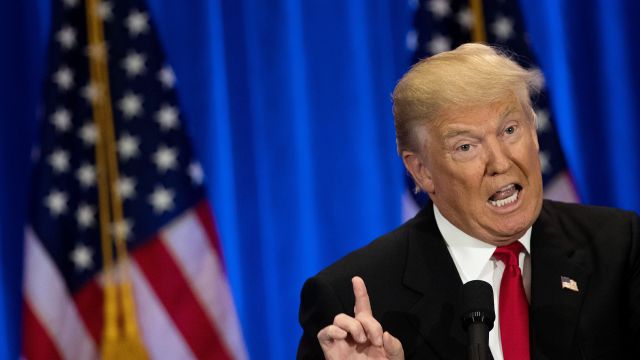 SMS
Trump Says He'll Debate — But He Has To See The Conditions First
By Newsy Staff
By Newsy Staff
August 9, 2016
Donald Trump has gone back and forth about the debates a lot. This time it looks like he feels like debating, after all.
SHOW TRANSCRIPT

Donald Trump is now saying that he will, after all, take part in the presidential debates.

But — BUT — he has to see the conditions.

He told Time, "I want to debate very badly. But I have to see the conditions."

In a tweet at the end of July, Trump accused Clinton and the Democrats of rigging the debates.

But on Monday night, Hillary Clinton's camp accepted the debates and challenged Trump to do the same.

On Tuesday, Trump also told Time, "certain moderators would be unacceptable." We're guessing he might be talking about Fox News' Megyn Kelly.

"She had blood coming out of her wherever," Trump said of Kelly in 2015.

Trump sitting out of a debate wouldn't be a huge surprise.

He did, after all, refuse to show up to one of the Republican primary debates.

If Trump refuses to debate during the general election, it would be the first time that's happened since 1972.

This video includes an image from Getty Images and clips from Donald J. Trump for President, Hillary for America, Fox News and C-SPAN. Music provided courtesy of APM Music.