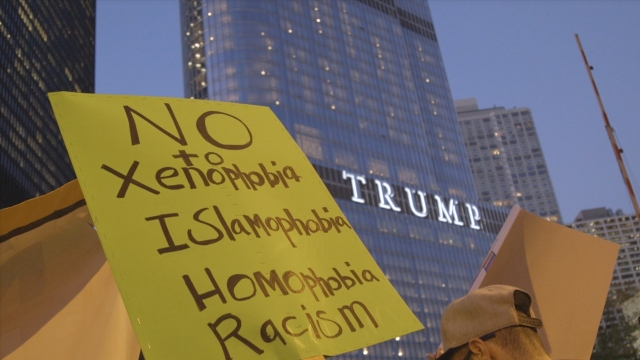 Donald Trump's victory on election night sent people across the country out onto the streets in protest.

Anti-Trump marches sprung up in several California cities after the election results rolled in. There were some reports of vandalism and at least one serious injury in Oakland.

Students in several California schools also organized mass walkouts Wednesday to protest Trump's victory. An official for Berkeley's school districts told the Los Angeles Times, "It's not the first time we've had a walkout. We know what to expect. We know what we need to do ... Our primary concern is to make sure they are safe during the school day."

SEE MORE: A Look At Trump And Obama's Strained Past

Protesters in Seattle, Washington, and Portland, Oregon, also blocked off several streets in protest. One activist told KING, "We are making noise. We are telling Donald Trump that we don't like that he's here. I feel like we're doomed. This can't be real."

In Washington, D.C., people for and against Trump crowded around the gates of the White House to demonstrate.

And demonstrators gathered outside of Trump Tower in Chicago for an "emergency protest" against the president-elect.

SEE MORE: Following Trump's Win, Many Californians Want To Secede From The US

One protester told Newsy, "I just want people to be aware that the fight's not over just because we have someone like Donald Trump in office."