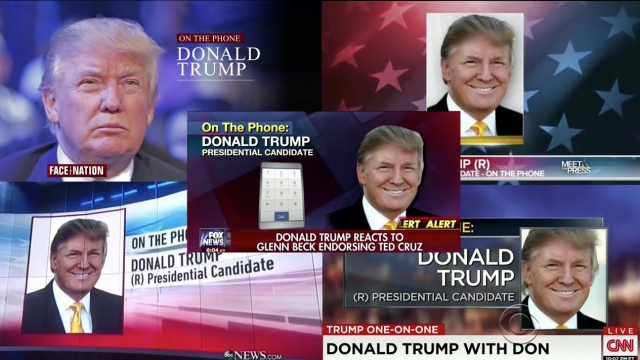 SMS
Donald Trump's Phone Interviews Are A Convenient Campaign Strategy
By Cody LaGrow
By Cody LaGrow
March 16, 2016
The Trump campaign seems to prefer that the GOP front-runner call into major network TV shows rather than appear on them.
SHOW TRANSCRIPT

Donald Trump must have free nights and weekends on his mobile plan because it seems like a majority of his interviews are over the phone.

"There's going to be a tremendous problem, I think," said Trump on ABC in regards to the possibility of a contested convention.

"It's got to be some kind of a record. That's a lot of wins. We had an amazing win last night," said Trump on CNN in reference to his performance in the primaries.

Fresh off a solid "Mega Tuesday" performance, Trump continued to phone in his interviews across major TV networks. And aside from it being boring and bad TV, it also seems to be a strategy.

For starters, viewers don't get to see Trump's body language. And I'm not talking about wanting more of this face or this one but to see how the man running for the highest office in the land reacts to hard questions.

"I'm just curious, do you plan on paying for the legal fees of this older gentleman in North Carolina who sucker punched a protester?" NBC's Chuck Todd asked.

"Well, I'm not aware; I do want to see what that young man was doing," Trump responded.

Phone interviews also don't put the interviewer in the same room as the interviewee. CNN's Chris Cuomo said it makes it easier for someone to talk over the interviewer — something even a seasoned journalist like Matt Lauer learned on-air in December.

"CBS This Morning" refused to let Trump to phone it in last week after his campaign canceled its scheduled on-screen appearance. The show's executive producer tweeted, "We won't take on the phone - so we'll wait for next time."

However, another CBS show did allow it — but more so to mock it. Late night host Stephen Colbert poked fun at the Republican presidential candidate's phone antics — even adding a ridiculous ringtone to match this already ridiculous campaign season.

This video includes clips from Fox News, CNN, NBC and ABC and images from Twitter and Getty Images.