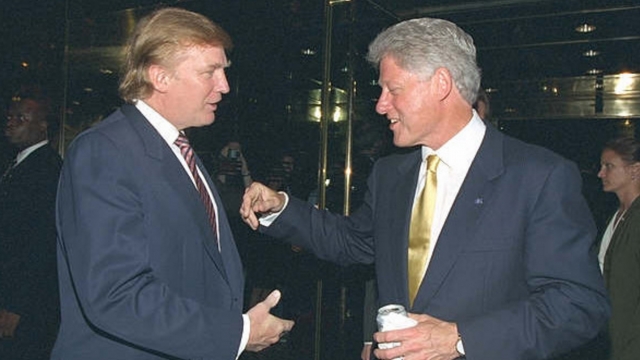 "I was going to say something extremely rough to Hillary, to her family," Donald Trump said during the first debate.

Trump has been alluding to using Bill Clinton's cheating as an attack on Hillary Clinton during the presidential debates.

But it looks like he's changed his mind. Trump promised Page Six he wouldn't be bringing it up after all, saying, "I want to win this election on my policies for the future, not on Bill Clinton's past."

Well that might be a good idea because going on the debate stage and bringing up President Clinton's infidelity to hurt his wife would probably backfire.

Before the Monica Lewinsky scandal broke in '98, Hillary Clinton's favorability was sitting around 42 percent. But by the end of the year, it was at 64 percent. That's a huge jump. It's not that her husband's infidelity is an asset, but when people are reminded of it Clinton gets sympathy points and she seems more real.

But what's probably more interesting is that her approval rating went up about 10 points with Republican women. And in 2016, Trump is already having serious issues getting that voting bloc on his side, and that attack isn't likely to help.

And a good political attack only really works if it's not something that can be turned around on you. Trump has his own cheating past, and Clinton probably has that in her pantsuit pocket.