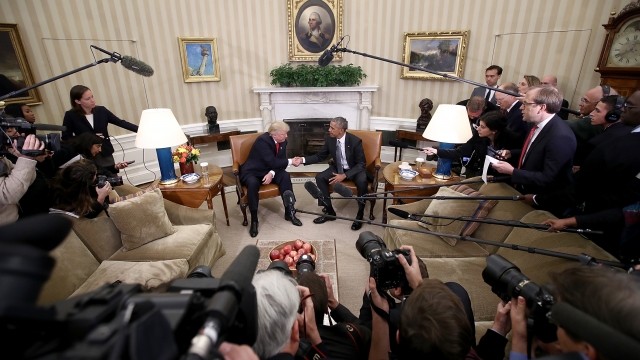 President Obama met with President-elect Donald Trump at the White House on Thursday. But it didn't exactly go as expected — at least when it came to press access.

This is what usually happens before that first transfer-of-power meeting. In 2008, then-President George W. Bush and first lady Laura Bush welcomed the Obamas to the White House in full view of the press corps.

Trump took a different path to the Oval Office out of view of the press. According to The Wall Street Journal, the Obamas canceled this year's photo op.

SEE MORE: A Look At Trump And Obama's Strained Past

One tradition that was kept — a photo op in the Oval Office that happened after their 90-minute meeting.

"I believe that it is important for all of us, regardless of party and regardless of political preferences, to now come together, work together to deal with the many challenges that we face," President Obama said after the private meeting with Trump.

"We discussed a lot of different situations, some wonderful and some difficulties. I very much look forward to dealing with the president in the future, including counsel," Trump said.