Trump Picked His Running Mate, And He's Going With Pence 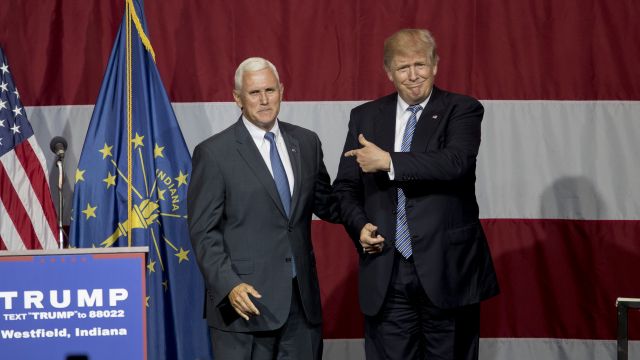 SMS
Trump Picked His Running Mate, And He's Going With Pence
By Jake Godin
By Jake Godin
July 14, 2016
The Indianapolis Star reports Donald Trump tapped Indiana Gov. Mike Pence as his running mate. How much of an asset will he be to the Trump campaign?
SHOW TRANSCRIPT

After waiting until pretty much the last minute to choose his running mate, Donald Trump has tapped Indiana Gov. Mike Pence as his vice president.

"Donald Trump gets it. Donald Trump hears the voice of the American people. He's been successful on Wall Street, but he's never turned his back on Main Street," Gov. Pence said at a Trump rally in Indiana.

Pence adds some political backbone to Trump's presidential bid, which hasn't exactly been the most disciplined campaign.

It's unclear how much of a boost Pence will be for Trump. The Indiana governor's approval rating with Hoosier voters has been in steady decline.

That might partially be due to a controversial religious freedom bill he signed that critics say allows discrimination against the LGBTQ community.

"Yes or no: If a florist in Indiana refuses to serve a gay couple at their wedding, is that legal now in Indiana?" asked George Stephanopoulos on ABC's "This Week."

"George, this is where this debate has gone, with misinformation," Pence answered.

With Pence taking on Trump's call to be his vice president, he will have to shut down his re-election run for Indiana's governor; state law won't let Pence run for both offices.

This video includes clips from Office of Indiana Gov. Mike Pence and C-SPAN and images from Getty Images and the Defense Intelligence Agency.