Donald Trump Mocks A Reporter With A Disability 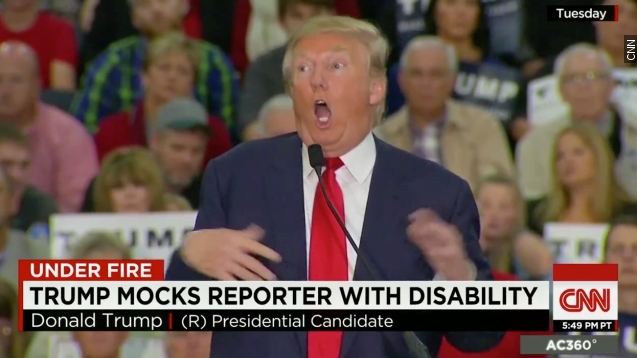 Presidential candidate Donald Trump has said some pretty harsh things throughout his campaign.

But mocking a New York Times reporter with a disability might be one of his worst.

Trump was referring to journalist Serge Kovaleski, who has a chronic condition that affects how his arms move.

More specifically, Trump was referring to Kovaleski's Sept. 18, 2001, article for The Washington Post.

"And holding tailgate-style parties on rooftops while they watched the devastation on the other side of the river. OK? Washington Post," Trump said.

Trump's used the article multiple times to defend his claims that he saw "thousands" of people celebrating the 9/11 attacks.

"I watched in Jersey City, New Jersey, where thousands and thousands of people were cheering," Trump said at a rally.

"I saw it. It was on television. I saw it," he later defended on ABC.

George Stephanopoulos asked, "You saw that with your own eyes?"

"George, it did happen. There were people that were cheering," Trump responded.

Both Kovaleski and The Washington Post have come out in defense of the article, saying "a number of people" doesn't mean "thousands" as Trump suggests he saw. (Video via The New York Times)

The New York Times released a strongly worded statement after Trump's comments about Kovaleski, saying, "We think it's outrageous that he would ridicule the appearance of one of our reporters."