Donald Trump: Mitt Romney 'Choked Like A Dog' In The 2012 Election 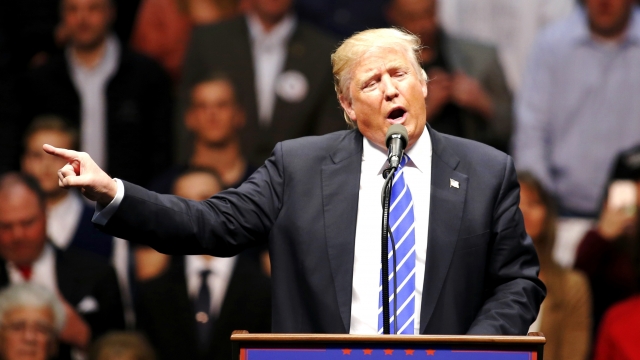 SMS
Donald Trump: Mitt Romney 'Choked Like A Dog' In The 2012 Election
By Ryan Biek
By Ryan Biek
April 13, 2016
Trump said during a rally in New York on Tuesday, "The last election should have been won, except Romney choked like a dog."
SHOW TRANSCRIPT

Trump told those at the rally, "The last election should have been won, except Romney choked like a dog. He choked. He went, 'I can't breathe!'"

There's been an ongoing dispute between the two candidates. And it's not the first time Trump has said Romney should have won the 2012 presidential election.

Like in Maine last month: "He's a choke artist. He's an absolute –– and I started hitting him so hard. In fact, people said, 'Why'd you hit him so hard?' Because we cannot take another loss," Trump said.

And in New Hampshire in August: "Mitt Romney let us down. He should have won that election. He failed. He choked. In the end, no different than a golfer who misses a putt on the 18th green," Trump said.

About six months ago, Trump didn't seem to be on Romney's radar nearly as much, even after Trump had publicly said he'd choked.

"Will you support Donald Trump if he's the nominee in the end?" Romney was asked.

"I will support the Republican nominee. I don't think that's going to be Donald Trump," Romney replied.

But last month, Romney outlined criticisms of Trump in an almost 20-minute-long speech. "Here's what I know. Trump is a phony, a fraud. His promises are as worthless as a degree from 'Trump University,'" Romney said.

Trump actually endorsed Romney during the 2012 presidential election. The businessman leads the race for the 2016 nomination but is still fighting to keep the Republican convention from being contested.