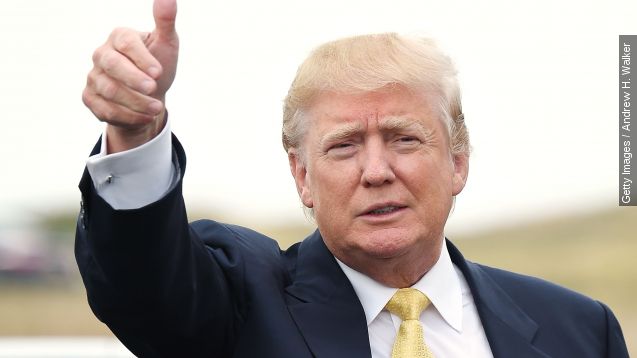 We're still seven months away from the Iowa caucuses, but the competition among the candidates for your Facebook likes and Twitter faves has already begun.

That's because with 15 different Republican candidates trying to win people over, much like high school, your numbers on Twitter and Facebook have become a way to measure popularity.

"This also means a very direct way of reaching potential voters out there; I mean there’s no filter," said a CBS reporter about how social media affected the presidential race.

"Because in the past you'd have this gaggle of reporters, things would kind of be filtered, for lack of a better word," said the CBS reporter.

"Well that's what Twitter is, it basically, it makes anyone a broadcaster," said Ackerman.

Of course, there's one candidate who broadcasts better than the rest: Donald Trump. As of mid-July, Trump had 3.28 million Twitter followers and over 26,000 tweets — each one seemingly more provocative than the last. (Video via Donald Trump)

And looking through their tweets, it's not hard to see why Trump is on top: He's angry, aggressive, direct and humorous — using Twitter as a weapon to attack the media and mock people he just doesn't like.

Compare that to, say, Walker, who uses his social media to share pictures of him dancing — or whatever you call that.

And when it comes to Facebook, from July 1 to July 7, Trump led the GOP with millions more likes and interactions than any other candidate — Republican or Democrat.

In one sense, it's not surprising. Unlike his competition, Trump has been a celebrity for decades and is a salesman by trade. (Video via Chicago Tribune)

On the other hand, Trump is the most famous Republican in the country, and that must worry a GOP trying to broaden its appeal.

The good news for the other candidates is Facebook likes don't necessarily translate into votes, and a lot can happen between now and February.

Corrections: A previous version of this video omitted Rand Paul's Facebook likes, misrepresented the number of Carly Fiorina's likes and misinterpreted Facebook data as all-time totals, rather than data from one week.