Donald Trump Has Threatened To Sue A Lot Of People 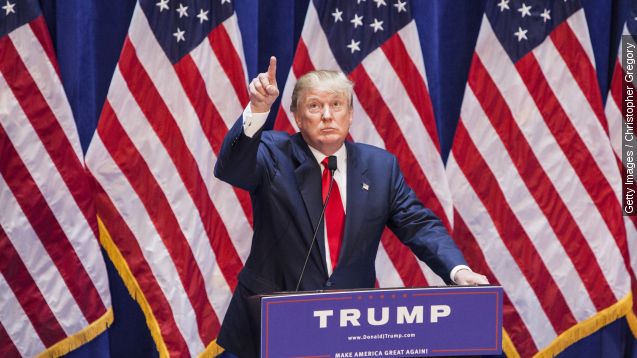 "Univision pulling out of hosting Trump's Miss Universe pageant because of wild comments he made about Mexican immigrants," said a WFOR correspondent.

"I'm going to have to sue Univision now," Trump said on Fox News.

"NBC will no longer air the Miss USA or Miss Universe pageants, partly owned by Trump, who is now, of course, threatening to sue," said an analyst on CNN.

"Hi @realDonaldTrump. My parents who passed away always said you were big inspiration. Can you pls RT for their memory?" tweeted Twitter user Philip Bradbury.

Trump responded on Twitter: "Some jerk fraudulently tweeted that his parents said I was a big inspiration to them + pls RT— out of kindness I retweeted. Maybe I'll sue."

"New rule. Donald Trump must immediately submit to DNA test to determine whether he is in fact the love child of a human woman and an orangutan from the Brooklyn zoo," Bill Maher said on his show.

"Do you really think he’s serious about it?" asked Conan O'Brien.

"How do I know what’s in this man’s head," Maher said.

"A lot of people are calling me about the Mac Miller rap song," Trump said.

"He has felt compelled to lie about how rich he is," Lawrence O'Donnell said.

Trump tweeted: "I heard, because his show is unwatchable, that @Lawrence has made many false statements last night about me. Maybe I should sue him?"

“He annoys me on a multitude of levels,” Rosie O’Donnell said.

"Former Miss Pennsylvania USA has officially resigned, is not going quietly and may now have legal troubles ahead of her," said a WPXI reporter.

"What we're doing is we're going to be suing her now," Trump told ABC.

"Big congratulations. You're a winner. She loses," an Extra reporter told Trump.

One lawsuit at a time.