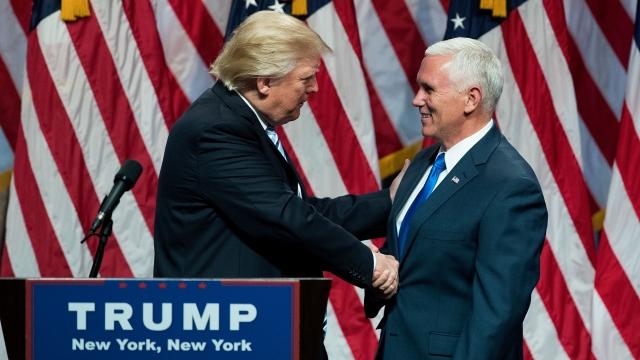 He had to get a few things off his chest first.

"Hillary Clinton is the embodiment of corruption. She is a corrupt person. What she's done with her emails," Trump told the crowd.

"She got away with murder, in fact, I think it may be her greatest accomplishment: escaping the recent scandal," he later said.

"What a difference between crooked Hillary and Mike Pence," he said.

"I said that Brexit's going to happen. I said that they are going to break away," he said.

"So Mike Pence will never be afraid to speak the name of our enemy," Trump said, as he seemed to return to his prepared remarks.

"Back to Mike Pence," he said.

"So one of the primary reasons I chose Mike was I looked at Indiana, and I won Indiana big," Trump said. "Remember, Indiana was going to be the firewall. That's where Trump was going down."

"I won the right to have the old post office building on Pennsylvania Avenue right near the White House," he said. "We're going to have an opening very soon."

But Pence got his moment — actually close to 12 minutes — after his 27-minute wait.

"I accept your invitation to run and serve as vice president of the United States of America," Pence said.

And he didn't even have the longest wait. Carly Fiorina waited almost 29 minutes for Ted Cruz to introduce her.

By comparison, Paul Ryan and Sarah Palin only had eight-minute waits.

This video includes clips from Right Side Broadcasting, C-SPAN, CNN and CBS and images from Facebook / Donald J. Trump and Getty Images.