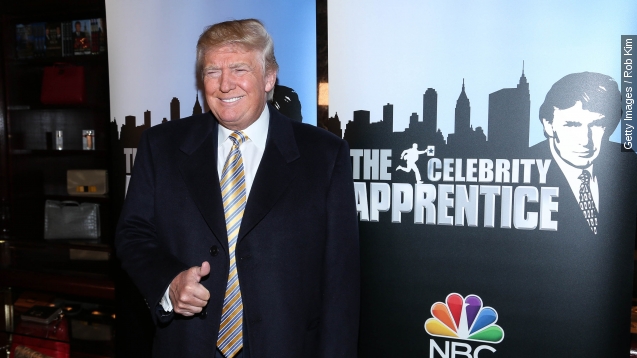 Both NBC and Miss Universe are washing their hands clean of Donald Trump.

The acquisition is rather sudden, though, seeing as how the Donald purchased NBC's half of the organization in order to fully own Miss Universe a few days ago.

Trump says the purchase also settled the legal disputes he had with the media conglomerate.

Now, Trump didn't leave the show on bad terms — he had to leave because of the presidential race. If he had stayed on as host, the FCC could rule that NBC was unfairly giving more air time to a political candidate. (Video via Donald Trump)

But NBC announced Monday it had found a replacement, and we'll give you a hint: "I'll be back."

Yep, it's Arnold Schwarzenegger. We won't see him in the boardroom for a while, though. "The Celebrity Apprentice" isn't slated to return until the 2016-2017 TV season. (Video via Omaze)

Obviously, Schwarzenegger is one of the biggest stars in the world — and a former governor — so he will definitely bring something unique to the series. (Video via Omaze)

His shift to television comes after he tried to revive his movie career with "Terminator Genisys," which grossed $440 million worldwide, but only $89 million of that here in the States.

Waiting until the 2016-2017 TV circuit will be the second time the celebrity-focused installment of "The Apprentice" franchise has gone on a pretty long hiatus. (Video via NBC / "The Celebrity Apprentice")

Before this past season (season 7), the show hadn't been on air since spring 2013. But even with that gap, interest for the reality show was still high. One episode last season had the highest rating for the show since May 2012. (Video via NBC / "The Celebrity Apprentice")

We think Schwarzenegger will do just fine. So Trump, you're fired — for now.