Donald Trump And Paul Ryan Now Have An Endorsement In Common 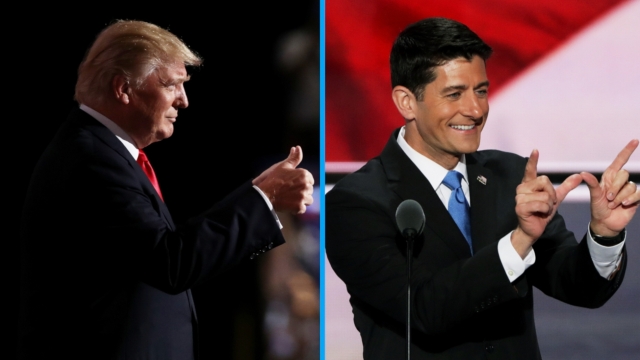 SMS
Donald Trump And Paul Ryan Now Have An Endorsement In Common
By Melissa Prax
By Melissa Prax
August 6, 2016
Trump's and Ryan's endorsements of each other sound pretty similar.
SHOW TRANSCRIPT

"We will have disagreements, but we will disagree as friends and never stop working together toward victory," Donald Trump said.

Donald Trump's and Paul Ryan's endorsements of each other were pretty similar.

SEE MORE: Are White Voters Enough To Get Trump The White House?

In June, Ryan wrote: "It's no secret that he and I have our differences. ... But the reality is, on the issues that make up our agenda, we have more common ground than disagreement."

"I need a Republican Senate and a House to accomplish all of the changes that we have to make," Trump said.

Ryan wrote, "House Republicans are helping shape that Republican vision ... by offering a better way ahead."

And both were pretty wary to endorse the other.

Trump told the Washington Post on Tuesday, "I'm just not quite there yet."

"Well, to be perfectly candid with you, Jake, I'm just not ready to do that at this point. I'm not there right now," Ryan replied.

While they may not seem like an olive branch, the mutual endorsements are likely more about uniting the GOP than smoothing over differences. Still, Ryan's campaign said in a statement "he appreciates the gesture."

This video includes clips from CNN, House Republicans, Right Side Broadcasting and Speaker of the House Paul Ryan and images from Getty Images.