A Vicious Presidential Debate Ends On A 'Nice' Note 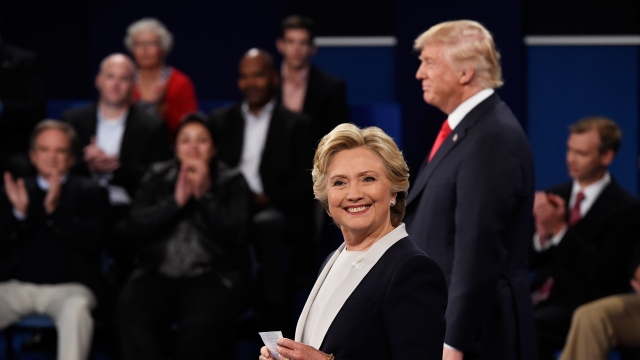 SMS
A Vicious Presidential Debate Ends On A 'Nice' Note
By Matt Picht
By Matt Picht
October 9, 2016
After a bitter 90 minutes, Clinton and Trump found something nice to say about each other during the second presidential debate.
SHOW TRANSCRIPT

During the second presidential debate, audience member Karl Becker asked each candidate to name one positive thing about their political opponent.

Hillary Clinton responded: "I respect his children. His children are incredibly able and devoted, and I think that says a lot about Donald."

Donald Trump answered: "I will say this about Hillary: She doesn't quit. She doesn't give up. I respect that."

It was a nice end to a very nasty debate.

For example, Trump told Clinton earlier in the debate: "Bernie Sanders, between superdelegates and Deborah Wasserman Schultz, he never had a chance. And I was so surprised to see him sign on with the devil."

And at one point, Clinton said, "Anything to avoid talking about your campaign and the way it's exploding and the way Republicans are leaving you."