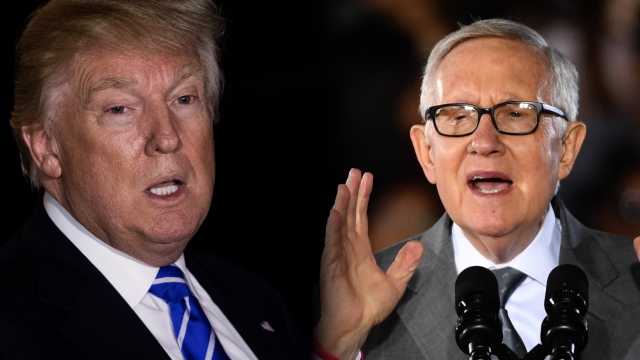 For months, President-elect Donald Trump and Senate Minority Leader Harry Reid have been in the political version of a rap beef.

"I believe Donald Trump is a liar. I believe he's a bully," Reid told MSNBC.

And Trump tweeted this out Sunday: "[Chuck Schumer] is far smarter than Harry [Reid] and has the ability to get things done." Schumer is taking over Reid's leadership position after he retires.

Reid has been one of Trump's outspoken critics during the campaign and after the election. After Trump chose the former head of Breitbart as a chief strategist, Reid took to the Senate floor, saying, "As long as a champion of racial division is a step away from the Oval Office, it would be impossible to take Trump's efforts to heal the nation seriously." Reid went after Trump more explicitly, saying, "Rise to the dignity of the office of the president of the United States, instead of hiding behind your Twitter account, and show America that racism, bullying and bigotry have no place in the White House or in America."

But the relationship wasn't always so tense. Take a look at this short congratulatory letter from 2010 that Reid's office gave BuzzFeed after Trump's tweet. In it, the incoming commander in chief writes that Reid is "amazing."

The letter has gotten a lot of play in headlines, but, keep in mind, Trump had just given Reid almost $5,000 for his re-election. And in 2010, Trump wasn't the hard-core Republican he says he is now.

The Trump-Reid feud probably isn't going to matter come January, because Reid is retiring. And his replacement, Sen. Chuck Schumer, has made it pretty clear he is willing to work with the new president moving forward.