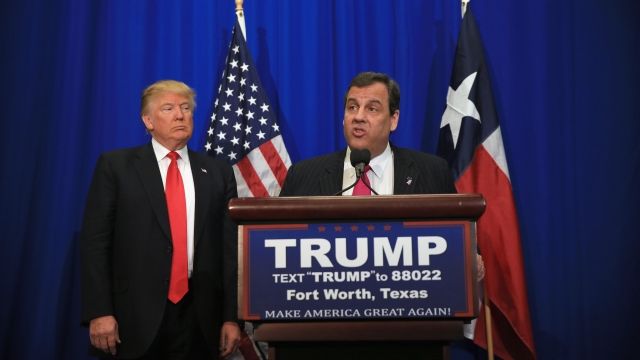 Back in July, New Jersey Gov. Chris Christie said he'd be disappointed but accepting if Donald Trump didn't make him his pick for vice president.

"Listen, no matter what phone call he makes to me today, I will take a deep breath and prepare for tomorrow," Christie said.

But according to a new report, Christie might not have had to face that disappointment.

The New York Post reported Sunday that, according to anonymous sources, Trump agreed Christie deserved the vice president spot — at least in private. Those sources said Trump told Christie, "Yeah, sure I'm giving it to you."

Trump reportedly pivoted on his decision after his team of advisers urged him to. The New York Post reports Trump's campaign manager at the time, Paul Manafort, and Trump's two sons allegedly pressured the businessman to pick Indiana Gov. Mike Pence as his running mate instead.

But after Christie dropped out, that tension seemingly disappeared. Christie was one of the first of the former GOP candidates to endorse Trump and almost immediately became a close confidant.

Christie was also widely rumored to be near the top of Trump's vice presidential list before Trump offered the spot to Pence.

Despite the alleged snub, Christie remained a key part of Trump's campaign. He's now the chairman of Trump's transition team. If Trump wins the election, Christie's job will be to help ease the Republican candidate into office.