Don't Use Your Head: US Soccer Bans Headers For Kids 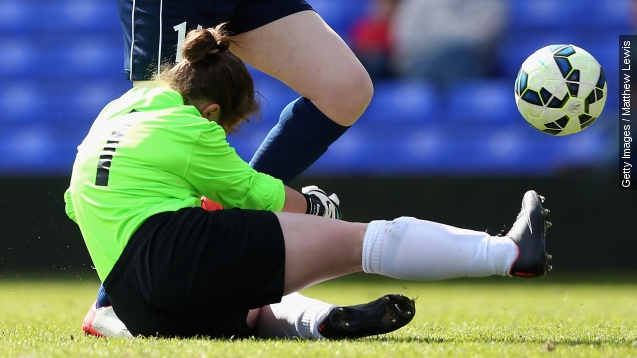 SMS
Don't Use Your Head: US Soccer Bans Headers For Kids
By Grant Suneson
By Grant Suneson
November 10, 2015
In an effort to reduce concussions, U.S. Soccer will prohibit kids 10 and under from heading the ball.
SHOW TRANSCRIPT

If you played sports growing up, you probably had a coach tell you to use your head. But that could become a thing of the past, at least in soccer.

As part of a new safety campaign designed to prevent concussions, U.S. Soccer announced they are "eliminating heading for children 10 and under, and limiting the amount of heading in practice for children between the ages of 11 and 13."

The change comes after a lawsuit filed last year against some of the largest youth soccer organizations in the country, including U.S. Soccer and American Youth Soccer Organization, demanding they take action to reduce head injuries in the sport.

Although soccer is often mocked in the U.S. for being soft, especially when fans see players flopping, it’s actually the second most dangerous sport for high schoolers.

In the 2005-2006 school year, a study found that 40 percent of concussions suffered by high school athletes were from football, which isn't surprising. But 21 percent came from girls' soccer and 15 percent from boys' soccer.

And female soccer players are actually much more likely to suffer a head injury. Another study determined there were 4.5 concussions for every 10,000 girls who took the pitch compared to 2.8 concussions in boys with the same exposure.

Even though the study highlights the dangers that soccer can pose, it actually refutes the idea that heading the ball is the most dangerous part of the game. An author of the study said it’s not the heading itself that causes concussions, but usually contact with other players.

Professor Sarah K. Fields told CNN, "If we can enforce the rules and minimize player-to-player contact, that could get rid of 60 percent of concussions, plus that would reduce other injuries."

In addition to the updated concussion rules, U.S. Soccer also announced it would improve protocols for athletes returning to play after suffering concussions.