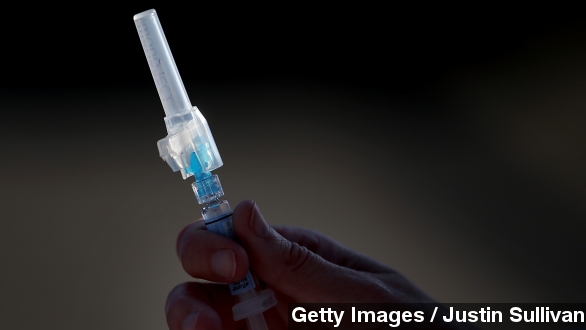 SMS
Don't Fall For Flu Shot Myths
By Madison Burke
By Madison Burke
November 23, 2014
Misconceptions abound when it comes to your annual flu shot. Medical experts say most people older than 6 months should get the shot.
SHOW TRANSCRIPT

Have you gotten your flu shot? The Centers for Disease Control and Prevention recommends that most Americans older than 6 months get the shot as soon as it becomes available in the fall, but every year some pass on the drug because of some common misconceptions.

One myth is that the flu shot shot can give you the flu. The CDC says that's just not the case.

While some flu shots do contain the flu virus, the virus has been inactivated and cannot infect you. The most common side effects are just slight irritation where the shot was given.

And then there is always the commonly held belief you'll be fine this year because you just got a shot last year. Unfortunately, it doesn't work that way.

Now, if you haven't gotten the vaccine because you thought you waited too late in the season, here's some good news.

Flu.gov explains early immunization is best, but you can get the vaccine at any time during flu season. It just takes about two weeks for you to be protected against the illness.

Every year around 200,000 people are hospitalized from the seasonal flu in the US.

The CDC says the shot reduces your odds of getting the flu by 70 to 90 percent.

Those advised not to get the shot include children younger than 6 months, and those who have allergies to any of the vaccine's ingredients.

Afraid of needles? You're in luck. Most providers also offer a nasal spray vaccination option.