Don't Call The 'Agents Of S.H.I.E.L.D.' Spinoff A Spinoff 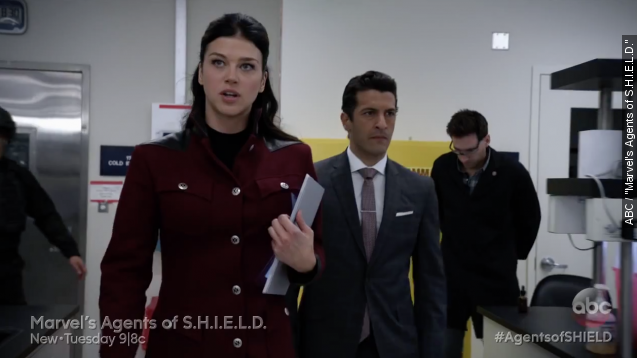 Well, if something is working you stick with it, right? Case in point: ABC and Marvel.

ABC is reportedly close to ordering a pilot for a new television show featuring Mockingbird, a character already seen in its "Marvel's Agents of S.H.I.E.L.D." series.

The character, played by Adrianne Palicki, was introduced in the show's second season. Originally only cast for a six-episode arc, Palicki was promoted to a series regular by midseason.

This news of a possible new show isn't too surprising since Marvel was reported to be working on a spinoff of "Agents of S.H.I.E.L.D." around the characters of Mockingbird and Lance Hunter earlier this year.

A few months later, Paul Lee, the president of ABC Entertainment, said he'd scrapped the spinoff because: "We think 'S.H.I.E.L.D.' hit its creative stride this year. We thought the right thing now is to leave them on 'S.H.I.E.L.D.'"

But Variety reports this new show around the same characters will be "an entirely new project solely focused on the two characters to continue their story." So not a spinoff — even though it still sounds like a spinoff.

If this new series titled "Marvel's Most Wanted" gets picked up, it'll be added to quite a lineup of Marvel shows for ABC. (Video via ABC / "Marvel's Agents of S.H.I.E.L.D.")

Besides "Agents of S.H.I.E.L.D." ABC is also bringing back "Marvel's Agent Carter" for a second season.

And writer-producer John Ridley is also working on a top-secret Marvel project for the network. He's the executive producer behind the television show "American Crime," which also calls ABC home.