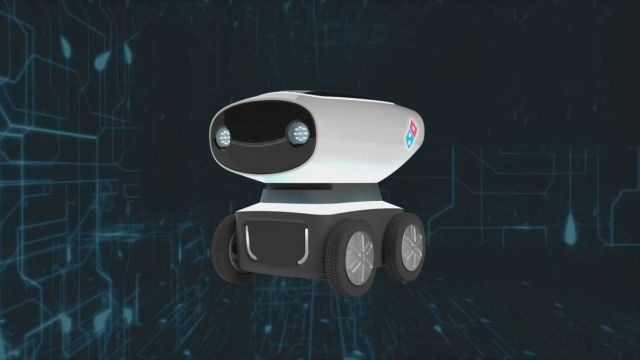 SMS
Domino's Is Testing An Actual Pizza Delivery Robot
By Matt Picht
By Matt Picht
March 18, 2016
The delivery robots are being tested in Australia and won't be ready for at least two years.
SHOW TRANSCRIPT

Google's self-driving cars and Amazon's delivery drone have both been leapfrogged by a pizza company. Sort of.

Domino's says the robot can hit speeds of up to 12 mph and autonomously navigate around obstacles. The autonomous driving tech was developed by Marathon, a company that specializes in making self-driving targets for military live-fire exercises.

Currently, DRU is only equipped to travel on small roads and footpaths, and its battery life limits it to 12 miles in a single journey. Domino's is also keenly aware a pizza-delivering robot might become a prime target for hungry thieves — its locked pizza compartment requires a specific code from the customer's smartphone to open.

Flesh-and-blood pizza deliverers don't have to worry about their jobs just yet, though. Domino's estimates it will take at least two years before DRU is ready for the road.