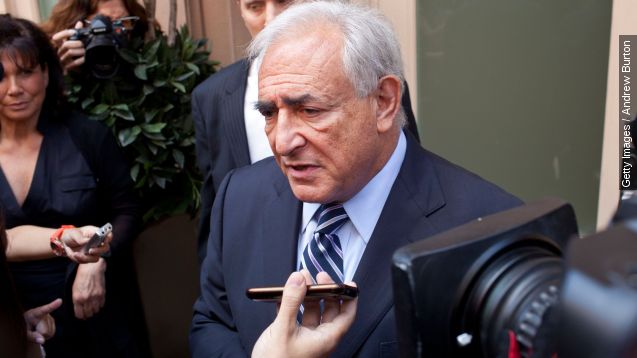 DSK is back in the news, and with him, a whole lot of headlines about “aggravated pimping.”

Dominique Strauss-Kahn, the former International Monetary Fund chief and one time French presidential frontrunner, was acquitted of the pimping charge Friday, bringing an end to four years of legal drama. (Video via France 24)

Strauss-Kahn first made headlines in 2011 when he resigned from his IMF job amid accusations he’d raped a New York City hotel maid.

“What happens in a room is a private thing unless the prosecutors find something to tell you that you are going to be charged with something,” Strauss-Kahn told CNN.

The charges were later dropped, although he ended up paying an undisclosed amount of money to the woman.

This latest case, which Strauss-Kahn called an attempt to “criminalize lust,” involved his alleged role in a prostitution ring.

Dubbed the "Carlton Affair" by the French press, Strauss-Kahn was accused of not only attending sex parties with prostitutes at luxury hotels, but organizing them.

To be clear, paying for sex isn’t illegal in France; pimping is. Because multiple prostitutes were involved in these sex parties, Strauss-Kahn was accused of the more serious charge of “aggravated pimping.” His lawyers admitted their client was present for the parties, but that at the time he didn't know the women were being paid.

When he took the stand in February, Strauss-Kahn said he had no role in organizing the parties — he couldn’t have, he said. His busy schedule wouldn’t have allowed it. (Video via BFM-TV)

Ultimately, the French judge said there wasn’t enough evidence to convict Strauss-Kahn. He would have faced 10 years in prison if convicted.