Dolphins Might Use Earth's Magnetic Field As A GPS 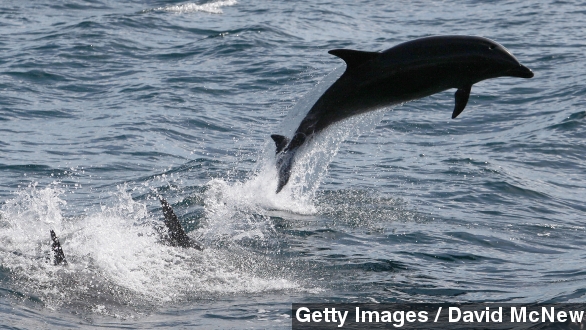 SMS
Dolphins Might Use Earth's Magnetic Field As A GPS
By Adam Falk
By Adam Falk
September 30, 2014
A study released Monday suggests dolphins might be able to sense the Earth's magnetic field and possibly use it as a means of navigation.
SHOW TRANSCRIPT

Dolphins can jump. They can shake. Make friends with NBA all-stars. And according to new research released Monday, they might have an even cooler trick.

The study, conducted by researchers in France, provided evidence of magnetoreception in dolphins. Basically, that means dolphins might be able to sense Earth's magnetic field.

If that were the case, researchers say the animals could use this sense as a means of navigation — a sort of biological Google Maps. (Video via Green Works)

The study looked at six bottlenose dolphins. Researchers set up two barrels — one contained magnetized blocks; the other had demagnetized blocks. Dolphins swam toward the magnetized one more quickly. (Video via GoPro)

Researchers say, "This is, to our knowledge, the first experimentally obtained behavioural evidence for sensitivity to magnetic stimuli in cetaceans."

That said, all other behavior remained consistent between the barrels, so researchers say further study is needed to provide conclusive findings.

Time reports: "If the findings hold up to scrutiny, it would be a momentous discovery. Although many animals are suspected to orient themselves using the Earth's magnetic pull, there's precious little proof that this is the case."

A previous study from researchers at Baylor found pigeons also use the Earth's magnetic field as a GPS.

LiveScience says animals that do this might have "ferromagnetic" particles, like magnetite, in their bodies. "Although magnetite has been found in the brain membranes of dolphins, it doesn't prove the animals use it to sense magnetic fields."

Researchers say it is possible dolphins were simply intrigued by the magnetized blocks, rather than physically drawn to them.