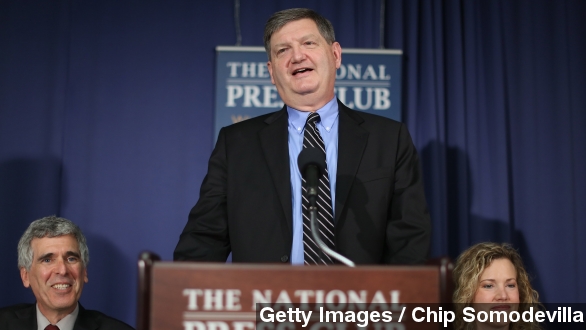 SMS
DOJ Won't Prosecute NYT Reporter For Not Revealing Sources
By Matt Picht
By Matt Picht
December 12, 2014
The Department of Justice does not intend to prosecute New York Times journalist James Risen for refusing to out his source of secret information.
SHOW TRANSCRIPT

The Department of Justice has finally decided not to force New York Times reporter James Risen to reveal his source for confidential information.

"Without this decision from the Justice Department, Risen would have faced possible jail time from the court had he refused to comply," NBC's Brian Williams said.

NBC first broke the story, citing an anonymous department official who said Attorney General Eric Holder directed officials not to force Risen to name sources — though the journalist may still face some more limited questions from the department about the circumstances of the leak.

Risen has been at odds with the Obama administration since 2008, when he was subpoenaed in the trial of former CIA official Jeffery Sterling. Sterling is accused of leaking classified information about a failed attempt to sabotage Iran's nuclear program. (Video via Democracy Now!)

That information appeared in Risen's 2006 book "State of War," and the government hoped the journalist's testimony could convict Sterling. But Risen vocally fought the subpoena, sparking a long legal battle that almost wound up before the Supreme Court.

The case stalled in June after the Supreme Court declined to take action, leaving the Justice Department the option of trying to jail Risen for not revealing his sources. On Wednesday, a federal judge ordered the administration to reach a decision about whether to take action against Risen by next week.

Attorney General Eric Holder's signaled his reluctance to prosecute Risen in the past.

During an interview, he said "Any reporter who is doing his or her job gathering news is not going to go to jail for that kind of activity."

It's easy to see why the government doesn't want to pursue the matter; Risen's case has drawn stern criticism from free speech advocates who fear the government is trying to silence investigative reporters and chill the free press.

Risen himself recently blasted President Obama "the greatest enemy to press freedom in a generation" in an interview with The New York Times. He's been relentlessly critical of the administration throughout the case.

"That's what I think is dangerous to a democracy, when you have investigative reporting that the government is trying to limit through the use of the Justice Department and the legal system," Risen said in an interview with Comedy Central.

The Obama administration already has several black marks on the subject of press freedom; they've been blasted on two occasions for searching the phone records and e-mails of journalists.

It's not clear what the Justice Department's next step is, but some reports indicate they might try to strike a deal with Risen for testimony in Sterling's trial. That case goes to court Jan. 12.