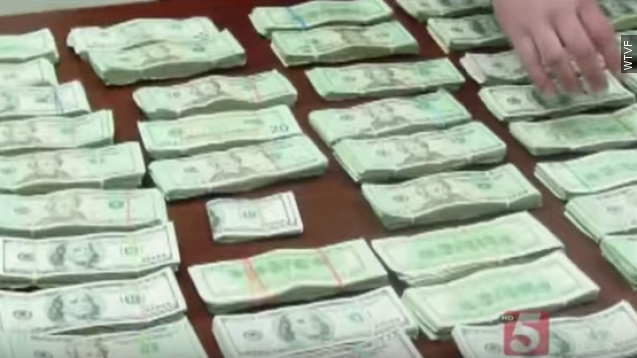 Local police hoping for a Christmas bonus may have just gotten the opposite. This week, the U.S. Justice Department announced it's pulling federal incentives tied to asset forfeiture.

Asset forfeiture allows law enforcement to seize any cash or belongings thought to be tied to a crime, even if those involved aren't charged. This would often happen in a situation like a traffic stop. (Video via WTVF)

Before, under the federal "equitable sharing program," police could choose to prosecute asset forfeiture cases under federal law rather than the often tighter state law.

By choosing the federal route, police were able to keep a large portion of assets they seized, which, over the years, added up.

According to the Institute for Justice, the DOJ paid state and local law enforcement $4.7 billion under the program from 2000 to 2013.

If you think that sounds a little backwards, you're not alone. The whole principle of asset forfeiture has been widely criticized. (Video via CNN)

So should we give the Department of Justice a pat on the back for seemingly righting a wrong here? Probably not. The department says it's making the change not because of moral obligations but because of budget cuts.

In a letter to local and state agencies the DOJ said: "We explored every conceivable option that would have enabled us to preserve some form of meaningful equitable sharing. The Department does not take this step lightly."

It didn't take long for critics to speak out. A statement from the National Sheriffs' Association reads: "While Congress and the President vacation in peace and tranquility, law enforcement knows all too well that the criminals, terrorists and criminal aliens do not take a holiday. Those seeking to do us harm can rest easier knowing one less tool can be used against them."

The DOJ has promised to reinstate the program as soon as financially possible.