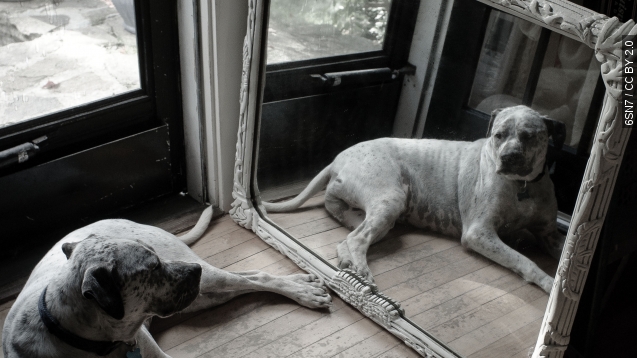 SMS
Dogs Are Likely More Self-Aware Than You'd Think, New Study Says
By Ryan Biek
By Ryan Biek
December 9, 2015
A researcher found an interesting way to show dogs likely have concepts of "self" and "others."
SHOW TRANSCRIPT

Psychologists have long wondered just how unique self-consciousness, as humans know it, is. But now, a researcher from a Russian university has shown dogs, and likely many other animals, are more self-aware than you might think.

So how do we know if an animal has concepts of "self" and "other" if it can't tell us? The perennial method has been a mirror test.

A colored dot is put on the forehead of the animal without it noticing. Then, the animal is put in front of a mirror, and if its reaction to the dot involves touching itself, instead of the reflection, we can assume the animal is self-aware. (Video via National Geographic)

But this new study's researcher, Roberto Cazzolla Gatti, noted dogs are usually pretty uninterested when it comes to mirrors –– and they're not the only ones.

Gatti said in a press release, "Only humans and great apes (gorillas excluded), a single Asian elephant, some dolphins, Eurasian magpies, and some ants have passed the test of mirror self-recognition."

He didn't believe other animals that often failed, like dogs, birds and pandas, did so out of a lack of self-consciousness. He believed they simply weren't as sensitive to visual stimuli as humans. (Video via CNN)

So Gatti released four dogs individually into a cage for five minutes. Inside the cage were containers with urine samples from each dog, and one container filled with cotton to act as a control. The dogs spent significantly more time smelling the other dogs' samples than their own, confirming they have some form of a self-concept.

Gatti said some further tweaks are needed to know for sure if dogs have a sense of self, instead of just a sense of what belongs to them.

But he called his study a "starting point," and hopes it'll spur more studies of self-consciousness beyond tests of visual perception.