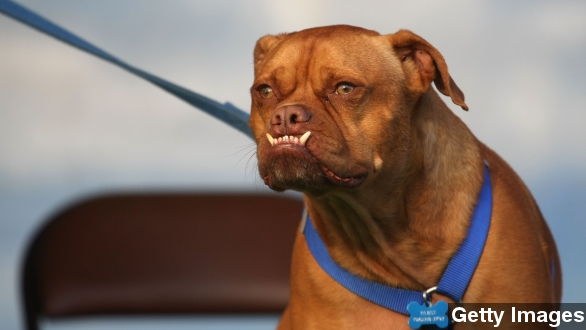 By Christian Bryant
July 23, 2014
A U.C. San Diego researcher says jealousy isn't just a human trait, and dogs aren't the best at sharing the attention of humans with other dogs.
SHOW TRANSCRIPT

Man's best friend — whether named Fido, Rocket, Rufus, Porkchop, Spike, or whatever — might want to be your only friend. (Via Getty Images)

Okay, it's not that serious but a new study shows canine companions aren't too keen on their owners giving attention to others.

U.C. San Diego psychologists and professor Christine Harris found that dogs get jealous too, especially when humans give attention to other dogs. Even if they aren't real!

Harris and one of her former students recorded the behavior of 36 different dogs in their own homes. The dog's owners were given a picture book, a bucket for Halloween candy and a toy dog — that barked. They were then instructed to read the book aloud and give attention to the bucket and the toy dog like actual pets.

According to the study, the dogs paid very little attention to the book and the bucket but more than 75 percent of the dogs nudged and snapped at the toy dog when owners interacted with it.

Harris told U.C. San Diego's news center, "Our study suggests not only that dogs do engage in what appear to be jealous behaviors but also that they were seeking to break up the connection between the owner and a seeming rival. ... It looks as though they were motivated to protect an important social relationship."

Now, the study of dog behaviors similar to those of humans isn't particularly new. Time points to studies by Marc Beckoff, author and professor emeritus of ecology and evolutionary biology at the University of Colorado, Boulder, that show dogs "exhibit altruism, empathy, and a sense of justice."

But Harris says the results from this study are particularly fascinating because jealousy was previously thought to require complex cognition — the kind that separates humans from other animals.

While one Forbes writer calls the study's methodology "pretty hilarious" and the results "common sense," she adds the experiments "suggest that there may be some biological underpinnings for jealousy among social animals."

But not everyone is convinced the findings show dogs actually feel jealousy.

Alexandra Horowitz, a cognitive scientist, told The New York Times, "What can be shown is that dogs seem to want an owner’s attention when there is attention being given out; this study confirms that."

Despite the small sample size, the researchers hope their findings, published in the journal PLOS ONE, will lead to further research on animals and social emotions.