Dog Gets Help After Staying By Friend's Side For A Week 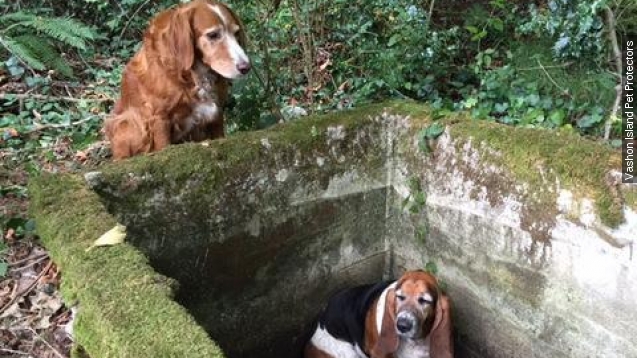 A dog from the Seattle area is a hero. Good ol' Tillie stayed by her friend Phoebe's side every day for nearly a week after Phoebe got stuck inside a tank meant to store water on Vashon Island.

Tillie only left Phoebe to try and get help for a few minutes each day. Someone reported seeing a dog coming up to them every day and then heading back to a ravine.

Vashon Island Pet Protectors in Washington state was alerted there was a dog that matched the description of one it posted as missing on its Facebook page earlier that week.

A volunteer who took the photos said they headed out to search the area with "a needle in the haystack hope."

But after calling out for Tillie, they heard a woof. When the volunteers saw her lying next to the tank, they got nervous.

"Heart sinking ... we knew that meant Phoebe was inside the cistern and every breath was held and every doggie prayer offered ... dear Phoebe [was] found perched on some concrete rubble that held her out of the water." Vashon Island Pet Protectors wrote on Facebook.

Who doesn't love a happy ending? Both dogs are doing just fine! A lesson here? As the volunteer told us, never give up hope on your missing pets.