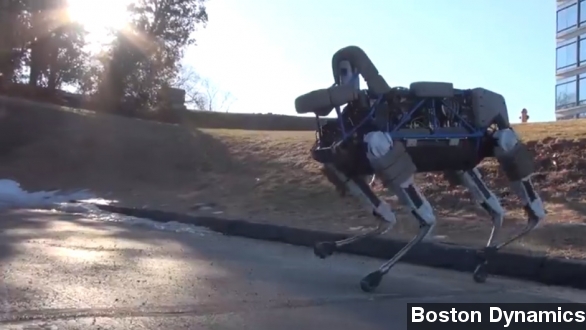 SMS
Dog-Bot Is World's Most Advanced Rough-Terrain Nightmare
By Jamal Andress
By Jamal Andress
February 10, 2015
Like other Boston Dynamics robots, Spot can navigate rough terrain by itself, but it seems faster and more stable than its predecessors.
SHOW TRANSCRIPT

Boston Dynamics and its parent company, Google, continue to make robot animals that are innovative, incredible and frightening — all at the same time.

The robotics company is calling its newest creation, Spot, possibly after its other four-legged robot friend, Big Dog. Big Dog, dubbed by Boston Dynamics as the most advanced rough terrain robot on earth, is about 3 feet long and 240 pounds.

Spot is nearly 100 pounds lighter, and it seems, based on the video, to be much faster than its big brother.

Spot has all the skills you've come to expect from the unsettling Boston Dynamics robots, like navigating by itself and climbing rough terrain. But what is by far the most impressive trick Spot has is this.

As many outlets have pointed out, Spot deals with the Leonidas-like kick very well — perhaps too well, according to Mashable.

While Boston Dynamics released the video Tuesday, it hasn't said what it or Google plans to do with the life-like robots.

"You are experiencing a car accident," says a robot in the film "I, Robot."